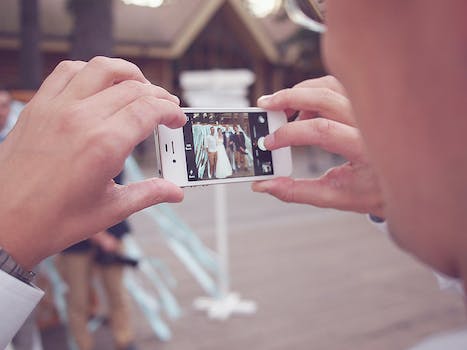 How to make money off your mobile photos

With millions of photos shared online each day, companies have inserted themselves as the middleman between amateur photographers and businesses looking for fresh, new original art. What was once a sector of the creative industry reserved for professional photographers can now extend to anyone with a smartphone and artistic eye—and there’s a big payday.

The new feature is an addition to the free app, available for iOS and Android, which has allowed people to sell their smartphone photos to interested buyers for more than three years. While the personal income from selling those images might not be enough to sustain a career as a professional photographer, it does allow users to earn some extra pocket cash as editorial sites and marketers increasing rely on using user-generated content.

Scoopshot CEO Petri Rahja told the Daily Dot that he wanted to find a way to help the businesses that his company works with cut costs while increasing revenue, while also fulfilling Scoopshot’s mission.

“I basically realized that (IAN) is kind of solving the publisher’s dilemma,” he said.

The feature is ideal for editorial websites and brand marketers looking to aggregate user-generated content and post it online. They can embed the photos for free, and they appear with an ad stripped across the bottom of the photo, much like you’d see in a banner ad on YouTube. Every time the photo and attached advertisement is viewed, the photographer earns money. 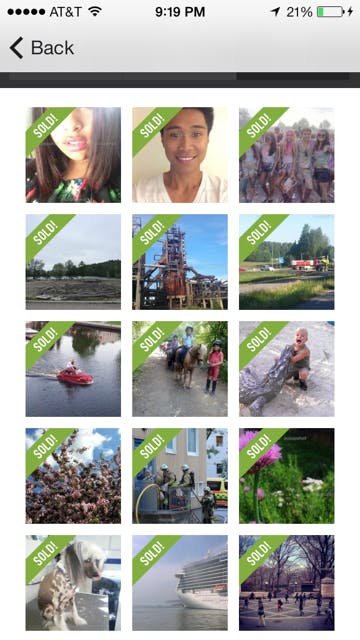 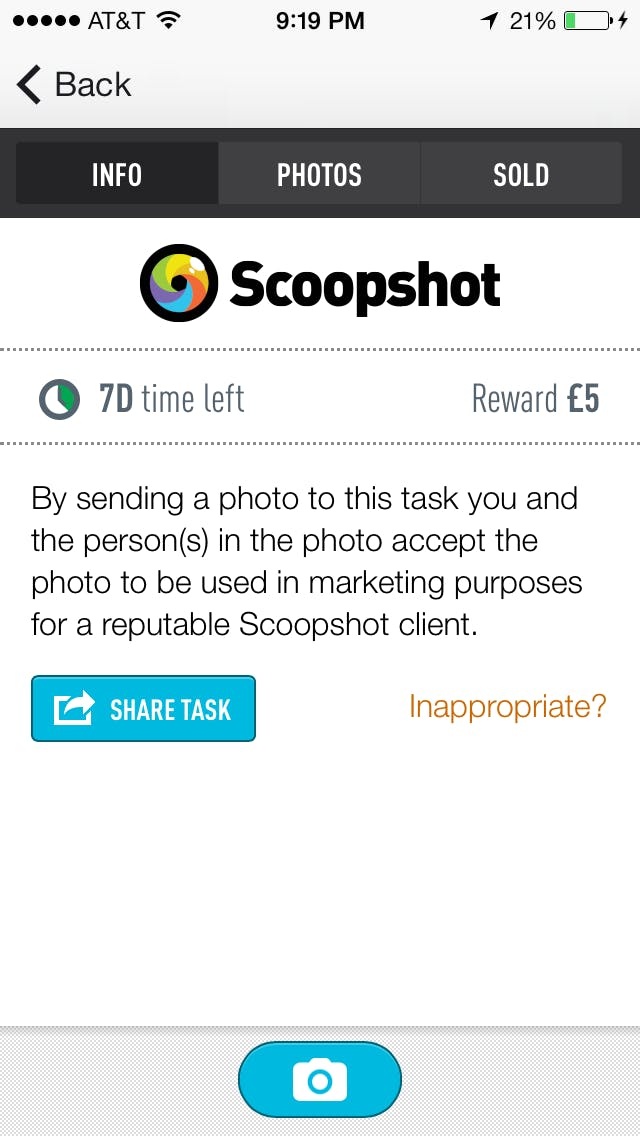 Scoopshot gives 50 percent of the advertising revenue to the photographer and keeps the other half.

Depending on site traffic and the type of advertising, a photographer can earn up to $5 per thousand impressions, according to Rahja. It doesn’t sound like much, but the earnings could add up.

And who better to capture those images than the people living in that moment?

“It’s very difficult to say,” Rahja said of how much money a mobile photographer could potentially make in a year. “But if you consider YouTube, now, where you get Likes and you get impressions and you get a lot of impressions, you might make a lot of money as well.”

The goal for these sites, however, is not to transform someone into a full-time professional photographer, but to give businesses a creative alternative to the traditional, and sometimes weird, pool of stock photos. Meanwhile, it creates a regulated environment for these exchanges to be made. People want credit for what’s theirs, and for the sites rounding up user-generated content, they get it—usually while retaining the rights to their work.

For Chad Newell, cofounder and CEO of Snapwire, this demand comes in confluence with a cultural shift. Because of social media, where the visuals we see each day are snippets of others’ real lives, we’ve been trained to want to see that same authenticity from businesses vying for our attention. And who better to capture those images than the people living in that moment?

“Mobile photographers for the first time were creating eye-catching, jaw dropping material and it dawned on me that there was an opportunity to monetize on that material,” Newell told the Daily Dot.

Snapwire, which launched in March 2014, creates a barrier of entry for its photographers that rewards more talented individuals to have a more noticeable presence on the site. Anyone is open to participate in a challenge, which range in topics from “Beginning of the Office Work Week,” to “Music and Musicians.” A team at Snapwire chooses the best photos from the submissions, and the photographers earn points. Every time a photo is nominated in a challenge, chosen for purchase by a brand, or uploaded to the photographers personal portfolio, points are awarded. Eventually, they work their way up five levels, indicating their skill and creating a system of trust between the photographers and the businesses. 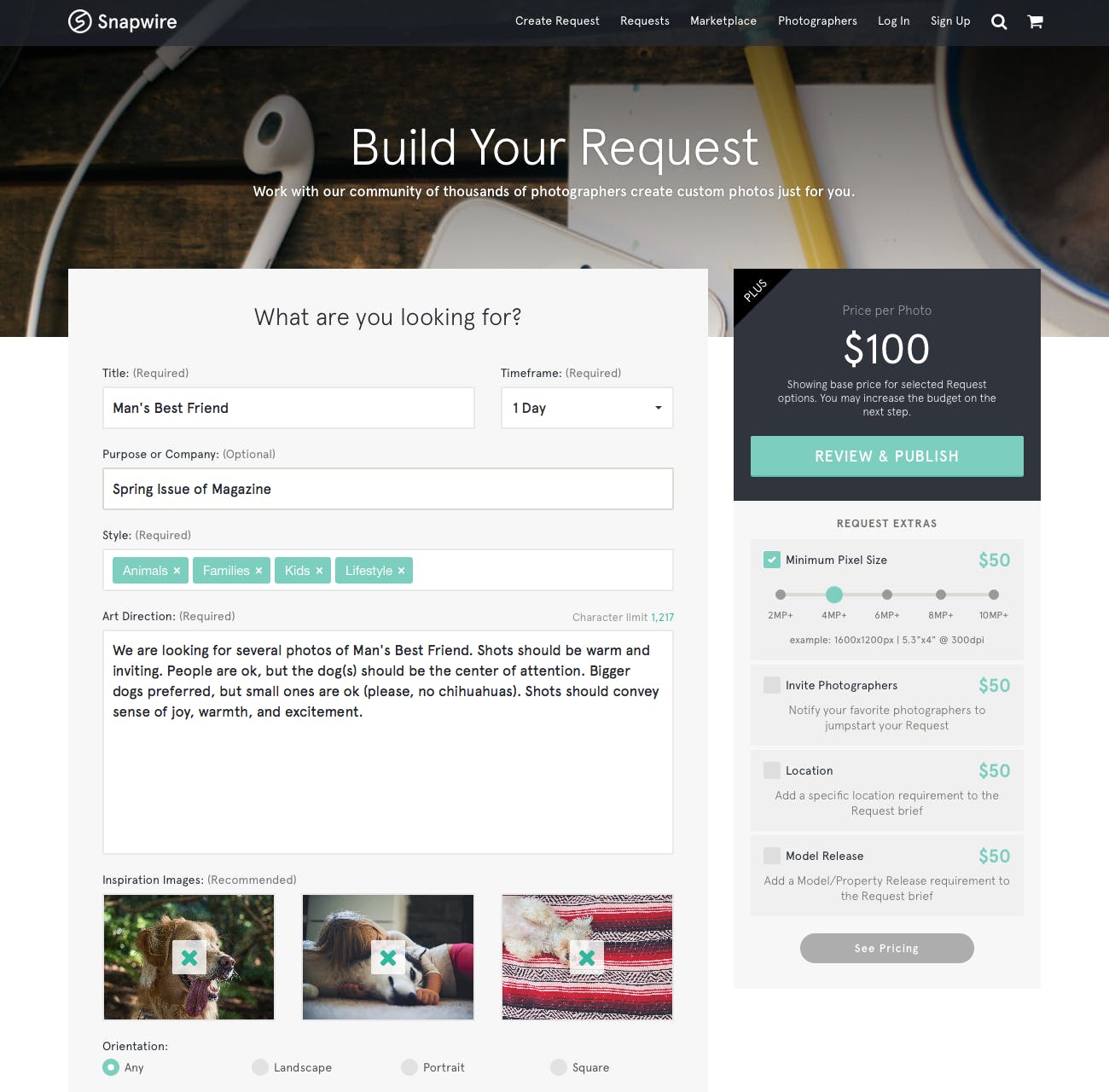 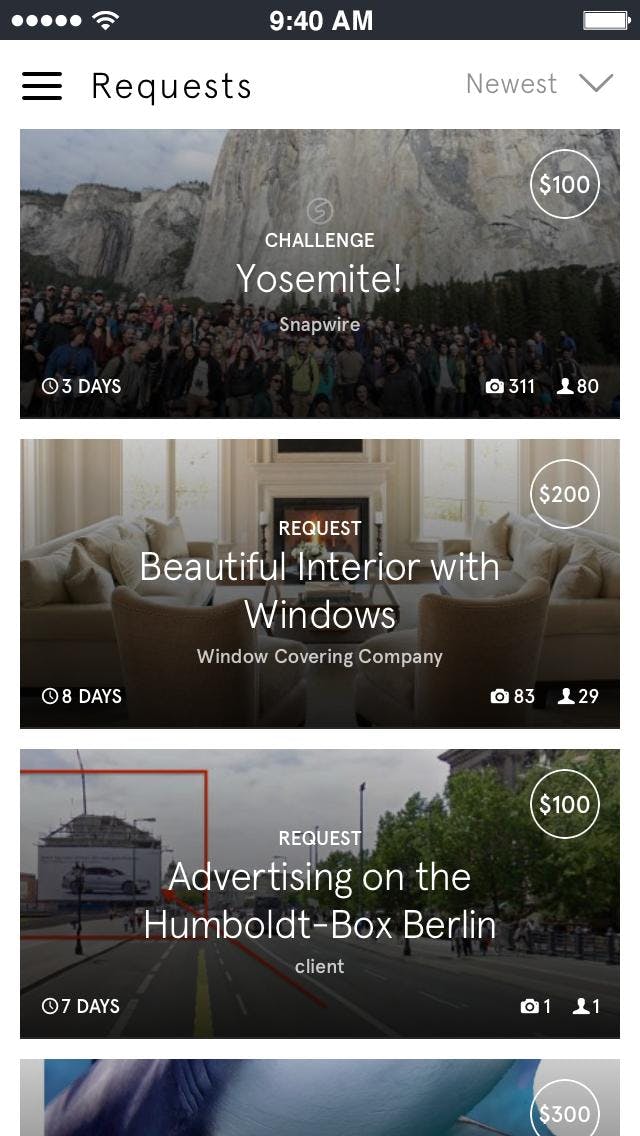 While buyers can only work through Snapwire’s online site, photographers can download the app in order to access and participate in challenges no matter where they are.

Snapwire charges anywhere from $5 to $100 for photos in their marketplace, depending on the size of the photo and its intended use, and Snapwire users whose photographs are selected take home 70 percent of the earnings.

“You don’t realize until you try the type of images you’ll get, how nice they are, how creative they are, and they’re funny.”

In comparison, Scoopshot users can name the price they’d like to charge for a photo, which Rahja says usually ranges from $5 to $10. Foap, another site that rounds up user-generated stock photos, charges $10 per shot. And Clashot charges 99 cents per photo on their site, which combines selections from professional photographers as well as amateurs using mobile phones.

Alternatively, businesses can also create requests for specific kinds of photos and name the price they’ll pay if they choose a submitted photo. Snapwire’s request form allows for a written description of a brand’s vision and a place to upload an example of what their looking for. Right now, you can get paid $500 for a cover shot of a “beautiful happy woman outdoors” for The Soul | Body Connection.

Scoopshot has a similar system for requests. Rahja says requests have been put in by editorial news teams to find photos of an event happening somewhere in the world and by brands who looking to collect photos of consumers using their products. For example, Finnish airline Finnair created an assignment asking users to submit a photo based on the question, “What’s the best part of your flight?” Rahja said that the company purchased 50 photos to use in their yearly report.

“The creativity of the crowd is mind-blowing,” Rahja said of the photographs submitted to various brands’ ad campaigns. “You don’t realize until you try the type of images you’ll get, how nice they are, how creative they are, and they’re funny. They put a smile on your face.”

Of course, these photographers won’t replace the professionals. But with smartphones and technology that lets us carry our lives with us everywhere, the line between photos and stock photos will blur. And for some lucky photographers, their wallets will be a little fuller.

Photo by Epicantus/Flickr (CC BY 2.0)