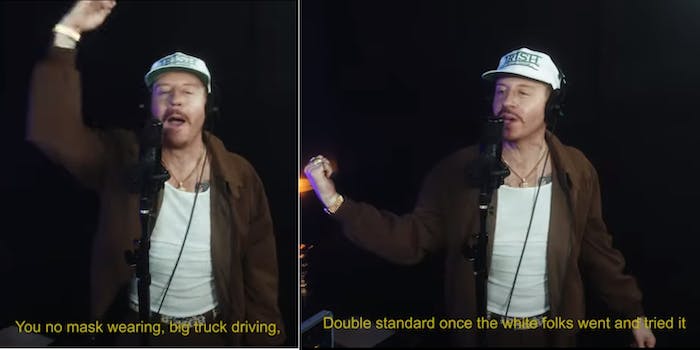 The rapper chases that sweet, sweet resistance clout—one last time from the top.

As if on cue, former white boy of the year Macklemore chased fleeting Trump clout as President Joe Biden took the oath.

Returning with a “freestyle” about identity crisis and progressive values as they relate to the 45th president of the United States, the 37-year-old rapper born Ben Haggerty uploaded a 2:36-long clip to formerly relevant millennial pop music station YouTube on Wednesday. Here Macklemore, whose “F.D.T.” remix did not return to virality amid the original’s November streaming resurgence, lays down some rhymes about Donald Trump, truck drivers, COVID-19, complacent liberals, and Blue Lives Matter supporters.

Though the song is labeled a “freestyle”—perhaps as a defense mechanism to convey that it’s a loosely conceived throwaway song you shouldn’t take too seriously, despite its clearly laborious production values—it seems to have been carefully written and rehearsed.

Does it suck? That’s not for me to say. But it is significant because it shows that post-Trump, as one editor put it today in work Slack, nature is healing. Welcome back to the Obama internet of 2015—many of the white nationalist online villains have been kicked out and cheesy art has room to breathe again.

There may be net neutrality on the Obama internet, but it’s ripe with earnest dad jokes and cat videos. Here, we hoped that new social platforms would usher in enlightenment and togetherness. On the Obama internet, there is no QAnon and your buddy from high school hasn’t drawn a parallel between the deep state and the coastal elitists who hate him. On the Obama internet, reading the New York Times at an area Starbucks isn’t a political act—it’s what Grandpa does after his morning walk.

Whether that’s an improvement or a regression back to the cheap thrills that papered over so many of society’s flaws is the debate that will dominate the next four years. Macklemore has shown where he stands on it.

The song is certainly nostalgic. Macklemore’s corny but earnest rapping on “Trump’s Over Freestyle” pairs well on a newsfeed with, say, the parrot that sings Led Zeppelin—a one-off video you get emailed by a boomer cubicle mate at the call center (via Outlook). This cubicle mate will later be reprimanded for inefficiency and selling homemade breakfast tacos in the break room. She will be terminated. Her loneliness will find comfort in Tucker Carlson.

But today, Macklemore deserves praise. His rap offering shows that this type of viral gag can mask the distressing fragility of a democracy that recently flirted with civil war.