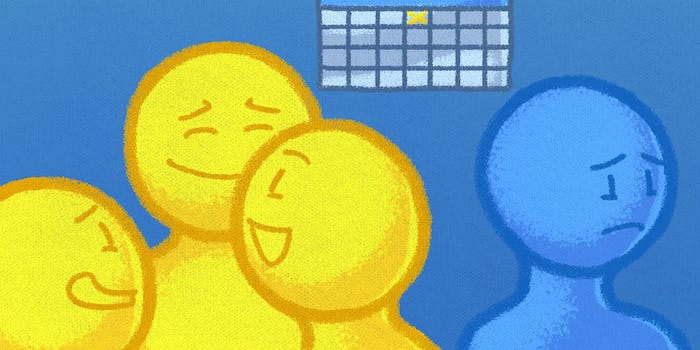 We love to hate April Fools’ Day. Companies release fake products that get consumers excited about ideas that will never actually exist, and we’re all just a little paranoid (for good reason).

Google goes unmatched in terms of its pranking prowess each year. The technology giant releases a number of new “products” on April Fool’s Day that are clearly fake with day-long shelf lives. This year, Pac-Man for Google Maps and the company’s Google Panda bot were among the most clever creations. The company was hardly the only one: The Internet had a field day with its fake selfie sticks and dating schemes.

But there’s a fine line between pranking someone and outright lying.

This year marketing company Boogie tried its hand at a “prank” that wasn’t very funny. The agency created a landing page and a brand design for an application called Chute that supposedly protects your phone from shattering when dropped on the ground.

That’s right: An app that keeps your phone from breaking when you drop it. Does that sound real? No. But… I mean, maybe? It wasn’t that long ago we all heard Apple was working on some sort of technology that would protect a dropped iPhone, so you’ll be forgiven if you didn’t totally dismiss the idea.

Boogie started the project two weeks ago, and the idea was to have people believe the application was real for a while before “revealing” to everyone that it is in fact completely fake, Jacques Bastien, CEO of Boogie said in an email to the Daily Dot.

The company actively pitched Chute like it was a real app—sending press releases and mockups to reporters and people who might be interested in the product, and directed people complaining about dropping their phones on Twitter to Chute’s website. Over 3,000 people signed up for the application in two days.

Boogie describes the “prank” in detail in a company blog post:

Responses on Twitter to Chute ranged from sheer delight to utter disbelief, which is precisely what we wanted. Our aim was to create hype for an app that claimed to do something so outrageous that it sparked chatter, but with a plausible enough technical explanation behind it to pass without too much speculation.

With all the effort that went into tricking people, it’s not surprising that a publication was duped. The New York Observer wrote about Chute as if it were a real piece of technology. In a correction at the top of the article, the Observer says it contacted the company for an interview, and the person the reporter spoke with “stayed in character” the entire time.

Product manager Daniel O’Connor at Boogie acted as Chute’s fake founder, and kept up the charade while lying to the publication, mimicking the answers to frequently asked questions on Chute’s website.

O’Connor emailed me to explain further. He said no one publication was targeted, and that they thought there were some giveaways in the pitch:

We assumed people would catch on to our prank before our reveal because of the following obvious things:
1. The iPad Mini doesn’t have a vibration function (this is a giveaway)
2. Apple has a patent similar to this (should’ve made it questionable)
3. The video created was obviously 2 separate videos edited into one
However, we never apologized for executing the prank because our intention was to get people to believe and talk about it.
As far as lying, our intention was to simply conduct a prank; as many others have done and are currently doing.

Bastien told me that after the Observer ran their story, Boogie contacted the publication to let them know the whole thing was a joke. There were three other publications planning on running a real story, too, and Bastien said he alerted the rest of them.

Making something go “viral” on the Internet is seemingly easy to do. Just look at all the marriage proposals and cat videos that have millions of views on YouTube. And yet “guerrilla marketers” or brand ambassadors and social engineers often like to force such serendipity. It’s really just a fun way of saying they like to mess with people to show how good they are at their jobs.

And you know, it’s OK: April 1 is April Fools’ Day, and that’s what it’s for. But when the preparation for it stretches back to mid-March and involves a false interview, we’re treading into an entirely different thing here. That’s not hilarious viral marketing—it’s just lying.

Boogie’s botched campaign is why so many of us hate April Fools’ Day. It’s the attack of the day, days even, and the waste of time trying to decipher if something is real or just a prank. And either way, we debate whether any of it is worth talking about.

I asked Bastien whether he feels like the so-called prank was dishonest, and I have yet to hear back. An update to the company’s blog does acknowledge people were upset.

Though we hoped that the big reveal about our hoax would allow us to share a laugh with the internet, news given of our “lame prank” with a wink and a smile has caused some shaking of fists.

Heed this as a lesson for next year, brands. You get one day, 24 hours, and no more. Otherwise, next time you try and hit us with a press release anytime in the surrounding months, you’re going to find yourselves in a “boy who cried wolf” situation.