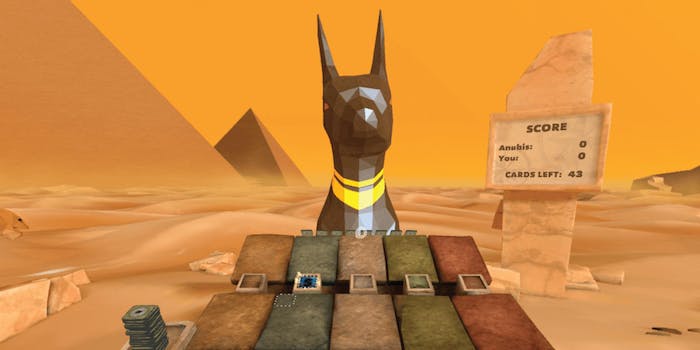 You won't be bored with this board game.

Virtual reality is presented as a place with limitless possibilities so it seems strange that a person would sit down at an imaginary table and play a board game. That’s exactly what the creators of Lost Cities, the first VR board game, are suggesting you do, and it doesn’t sound like such a bad idea.

Lost Cities is an classic title that board game fanatics are likely to recognize. Originally published in 1999, the two player card game won the International Gamers Award for best strategy game and made the jump to the digital realm when it was released for Xbox Live Arcade. Now it’s making the next logical jump, going to virtual reality thanks to the work of VR and web development company Campfire Union.

Strange as it may seem to strap on a pricey headset in order to do something that you can do at your kitchen table, Campfire Union co-founder and CTO John Luxford told the Daily Dot that it makes perfect sense given the current limitations of virtual reality.

“Everyone instinctively jumps to vast, open worlds when they first think of VR. Unfortunately, there are lots of unsolved problems with locomotion which can lead to motion sickness,” Luxford said.

He also suggested that the issue is especially prevalent for mobile VR because there is no positional tracking to allow a person to lean or move around freely. Because of the shortcomings of the platform, it made more sense to make a game that requires focus to primarily be directed straight in front of the player.

It has proven to be a problem for many virtual reality rigs, which often leave users disorientated and feeling off-kilter. Some studies suggest 50 to 80 percent of people are impacted by digital motion sickness, depending on the type of content shown. For a game that requires ongoing immersion in the game world, mitigating these effects is a top priority.

With the guard rails put in place for what is possible, Campfire Union set out to find a product that would work within the defined area. Lost Cities fit the mold.

“There aren’t too many moving pieces that would require fine motor coordination, and the gameplay all happens right in front of you, but the theme allows us to create these really compelling worlds you get transported to as you play,” Luxford said. “There’s a lot of rich mythology behind the stories of ancient lost cities too, allowing us to bring in characters like Anubis, the Egyptian god of the afterlife.” 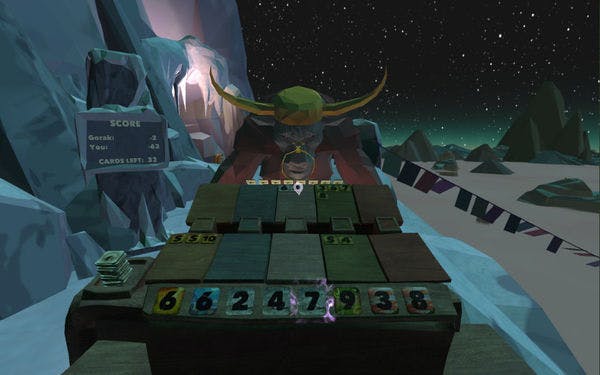 The game does provide amble opportunity to do some virtual exploration. There are five unique environments that the game takes place within—Desert Sands, Neptune’s Realm, Himalayan Mountains, Ancient Volcano, and Brazilian Rainforest—and an Indiana Jones-style narrative ties the expeditions together into a cohesive story as players collect ancient artifacts from each locale.

Even with the pre-built parameters of the board game, deciding exactly how to bring Lost Cities to life wasn’t as simple as just animating the game pieces. We had a pretty good sense of how we envisioned the worlds themselves, but there ended up being some pretty substantial challenges around visibility, user input, and player comfort, even with such a seemingly simple game,” Luxford said.

The team at Campfire Union found that stacked cards were too difficult to read in VR headsets, so they switched to tiles. Even getting the virtual table to look and function correctly took plenty of trial and error. “One position would be very legible, but obstruct your view of your opponent and the rest of the scene. Others felt like it was too far away, or would cause neck strain after a few rounds.”

The real benefit of taking board games to the realm of the virtual has less to do with immersion and more to do with participation; Lost Cities becomes a game you play with your friends across the world once you bridge the physical gap by stepping into virtual reality.

“VR can transport you anywhere, especially to places that don’t exist in real life. When you factor in sounds and being able to play against others online, that immersion really adds a lot to the experience,” Luxford explained. “Even with the limitations VR has today, multiplayer brings it to a whole other level. Seeing where someone is looking, and being able to talk to each other across the board add a level of human connection that just isn’t possible on non-VR gaming platforms.”

Lost Cities may be the first board game to get a three-dimensional reimagining, but Luxford believes it won’t be the last. “I actually think we’ve only scratched the surface when it comes to board games in VR, and very much so for AR too.”

Lost Cities will make its way to the Oculus Rift and Samsung Gear in March 2016, meaning you’ll be one step closer to living out the fantasy scenarios Jumanji placed in your head two decades ago.