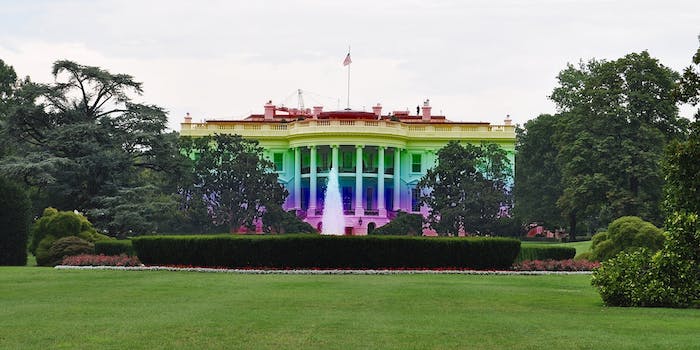 In December the president of the Log Cabin Republicans told MSNBC’s Chris Matthews that Donald Trump was “the most pro-gay” presidential candidate running for the GOP ticket in 2016. Today, that same conservative LGBT group is coming down hard on the front-runner—demanding that Trump clarify his stance on same-sex marriage.

In a video posted to the gay GOP contingent’s YouTube page Monday, a series of news clips show Trump giving slightly differing answers about marriage equality in interviews. At one point, he said conservative evangelical voters “can trust me on traditional marriage.” During a separate interview, he promised “to bring all people together” and agreed with a reporter that asked whether voters can expect “more forward motion” on LGBT rights.

Trump’s reputation as the most LGBT-friendly Republican candidate is historically based on cultural aspects—his friendships with out celebrities such as George Takei and his attendance at same-sex weddings. His direct statements have flip-flopped, ranging from stating support for LGBT rights in the workplace to emphasizing a preference for civil unions over same-sex marriage. But Trump has also called marriage equality “the law of the land.” So where does he really stand?

Angelo said that Trump has made some key pivots away from LGBT rights in the months since the Log Cabin leader called him “pro-gay” in December.

“Donald Trump said he would strongly consider appointing justices to the United States Supreme Court that would overturn the marriage equality decision that allows committed same-sex couples to engage in civil marriage partnerships,” Angelo told the Daily Dot. “Promises that Tump has made to the evangelical wing of the Republican Party are also cause for concern.”

One of those concerning promises is Trump’s assertion that he would sign the controversial First Amendment Defense Act (FADA), a proposed bill that would protect people who oppose same-sex marriage. FADA would make it possible for government employees (like Kim Davis) to refuse to process paperwork for same-sex spouses and would directly interfere with civil rights rulings on anti-LGBT discrimination on the federal contractor level.

“The act is a piece of legislation that is not supported by Log Cabin Republicans,” explained Angelo, “Because it provides an overly broad license to discriminate against gay people and anyone who—not even citing religious beliefs—might hold ‘moral objections’ to someone else’s being. Those things should be of concern to anyone who identifies as part of the LGBT community, whether they are Republican or not.”

The Log Cabin Republicans have not announced an official endorsement of any candidate, but with Trump leading primaries and all of the other viable GOP contenders being expressly anti-marriage equality, it’s clear why the group is focusing demands on the real estate magnate.

When asked whether there might be another candidate who seems like even a potential fit for LGBT Republican voters (after all, Caitlyn Jenner has publicly expressed support for Ted Cruz), Angelo called it a case of “the Devil you know.”

“While Trump has given members of the gay community reason to be optimistic that he would do no harm and perhaps even advance LGBT rights if he were elected president, you can’t say that for sure,” Angelo told the Daily Dot. “The push behind our ad today was seeking clarification on these issues. Given the timeline that we’re on, we couldn’t wait any longer to elevate that question.”

Photo via Eric Salard/Flickr (CC BY 2.0) | Remix by Max Fleishman