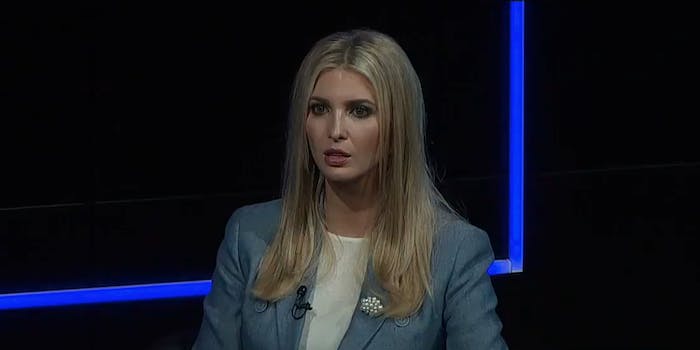 She apparently sent them 'before she was briefed on the rules.'

After the Washington Post broke the news Monday that Ivanka Trump used a personal account to send hundreds of government business emails. Now, people on Twitter are calling to “lock her up.”

Within minutes of the news report, the first daughter was trending on Twitter, many of the tweets including the phrase “lock her up.” The phrase is a staple rally chant of President Donald Trump, who called for Hillary Clinton to be locked up for using a private server for government emails when she was Secretary of State. Trump dubbed his Democratic opponent as distrustful and “crooked” for her use of private emails to discuss governmental affairs.

The irony is all too contagious for many on Twitter, who are using the phrase against the Ivanka Trump in memes and other commentary.

This is me conducting the Lock Her Up chant next. pic.twitter.com/2pxnob0mV8

According to the Post, Ivanka Trump sent hundreds of emails to White House staffers, including White House aids and Cabinet officials, from a personal account. Many of the emails are allegedly in violation of federal law.

Trump’s spokesman for ethics and counsel, Peter Mirijanian, told the Post that Ivanka used her private email early in the presidency, “before she was briefed on the rules.”

Read the full report over at the Washington Post.