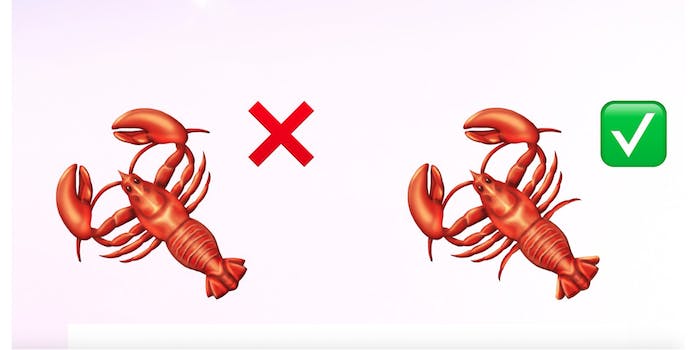 The residents of Maine rallied to get the lobster its proper number of legs.

When the Unicode Consortium announced this year’s batch of new emoji, most of us were elated. A redhead emoji? Finally! A llama emoji? Hold on, alpaca my excitement! The citizens of the great northeastern state of Maine, however, were most jubilant over the addition of the lobster emoji. While it’s not their state animal, it is one of their chief exports, their claim to fame, and a decidedly delicious meal. There was a problem: the emoji was wrong.

And so were a couple of other emoji, too: the DNA strand and, curiously, the skateboard emoji as well. The problem for the lobster emoji was that it had too few legs, eight instead of 10. The DNA strand twisted the wrong direction compared to real DNA strands. And the skateboard drew criticism from the one and only Tony Hawk, who called its design outdated.

“It just is very much a mid-’80s skateboard, but at a beginner level, and definitely not representative of modern skateboarding,” Hawk told New York Magazine.

The Unicode Consortium has heard these cries and will be amending the emoji so they are correct.

However, perhaps the citizens of the connected world are taking their emoji obsession too far. Emoji are small, silly icons on our phones. Does it really matter if they’re real-world accurate?

Well, yes. As much as we’d like to say emoji are trivial, they have become an important mode of communication and self-expression in the digital age. It’s the whole reason those of us with red hair, curly hair, or no hair are excited that we’re finally gaining representation in Unicode’s graphics set. While many of us likely never would have noticed that the lobster emoji was lacking one pair of legs, to the fine folks of Maine, that faux pas was unacceptable. Same for the DNA strand, and for the “antique” skateboard design that the Unicode Consortium updated.

Emoji have become too important for there to be glaring inaccuracies in their designs. If you love something, that emoji has got to be correct.