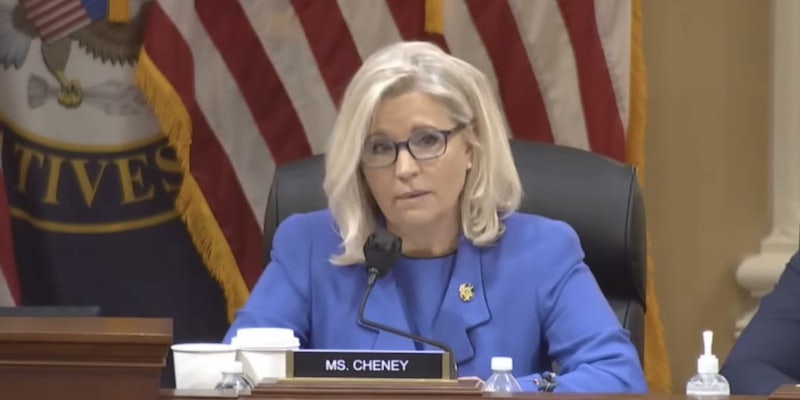 The winds of fortune shifted sharply against Liz Cheney after the Capitol riot.

To see how extremist the Republican Party has become, one need look no further than Rep. Liz Cheney (R-Wyo.).

A few short spins around the sun ago, Cheney was a powerful hard-right Republican. Her online footprint froths with posts opposing reproductive freedom, calling Vice President Kamala Harris a “radical leftist,” blasting the “absolute lunacy” of the Green New Deal, and toeing the outer edges of what was the party line.

In 2013, she tweeted that then-President Barack Obama’s “climate change” policy was based on “phony science.” Two years later, she slammed him for saying climate change is one of the main challenges facing the planet.

During Supreme Court Justice Brett Kavanaugh’s confirmation hearings in 2018, Cheney’s feed was basically the Twitter version of a fan cam for the man multiple women accused of sexual assault. Hell, she opposed same-sex marriage for years, even though her sister is a lesbian. She finally admitted she was wrong just last year.

Until recently, Dick Cheney’s daughter was one of the party’s brightest stars. She unflinchingly supported Trump throughout his term, frequently lavishing him with praise on social media.

When then-Minority Leader Nancy Pelosi tore up Trump’s speech after the State of the Union Address, Cheney posted on Facebook that the move rendered Pelosi “unfit for office.” (Her feelings on eating, stealing, and flushing White House documents are unknown.)

The winds of fortune shifted sharply against Liz Cheney after the Capitol riot.

Cheney is among the few Republicans who refuse to downplay the assault on democracy that occurred on Jan. 6, 2021. And she’s among a tiny cohort of GOP representatives who continue calling out Trump’s election fraud lies and role in the riot.

Cheney’s integrity on these matters have made her an unlikely heroine to many who vehemently disagree with her politics.

It also cost Cheney her seat to a primary challenger willing to go along with the lies (with a few QAnon talking points thrown in).

Liz Cheney doesn’t have much time left in Congress—but that doesn’t mean she’s out of the political game for good.

She’s considering running for president in 2024. It’s uncertain that the party she served so loyally for so long will support anyone who dares criticize Trump, however.

If the Republican Party has become too extreme for a Cheney, then the political chasm has grown so wide that it’s hard to imagine how we’ll bridge the divide.

And that should frighten everyone.