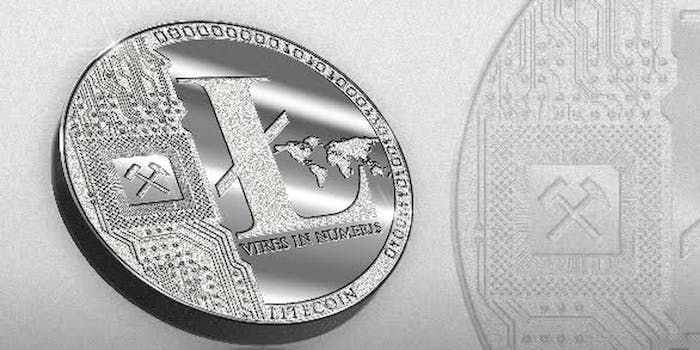 Is Litecoin the next Bitcoin?

Just when you were getting used to the idea of Bitcoin there's a new virtual currency you should know about.

What would you think if I told you you could pay your bills and buy a condo using money which is nothing more than a strip of numbers and is backed and recognized by no country under the sun? That’s the idea behind Bitcoin, the virtual currency that was once only whispered about around the murky corners of the Web, but now regularly makes headlines.

But Bitcoin is not the only such magical make-believe money. Another virtual currency, Litecoin (LTC), is set to push our economy slightly further along the way to a place where non-state currencies are common.

“The development team doesn’t see LTC as a competing currency to BTC,” Litecoin’s Anton Yemelyanov told the Daily Dot. “There is no association between these cryptocurrencies (other than Litecoin stems from Bitcoin).”

What makes LTC interesting in the near term is Mt. Gox’s plans to begin trading the currency alongside Bitcoin. Mt. Gox is responsible for 80 percent of the worldwide exchange of Bitcoin, so its adoption of Litecoin shines a light on the currency.

Mt. Gox has been pummeled by repeated distributed denial of service attacks (DDoS) and has pushed back plans to open LTC trading, but it has stated its interest and intention clearly.

“We were planning on (introducing Litecoin to the exchange) two weeks ago,” Mt. Gox said in an April 24th press release (PDF), “but events derailed that plan. Right now we are focused on overall stability of the exchange, and will launch LTC when we are ready. Otherwise we could be further complicating things.”

Litecoin is already traded on two smaller exchanges, BTC-E and Vircurex. A single Litecoin is currently valued at around $2.80.

One of the big complaints during the panic sell-off of Bitcoin several weeks ago was that Mt. Gox, BitInstant and others were taking a long time verifying transactions. So the idea of greater speed, a claim LTC makes regarding its currency’s transactions, may prove attractive.

“Usually the most favorable aspect of Litecoin as seen by users,” said Yemelyanov, “is its transaction confirmation time, which is 2.5 minutes instead of 10. Litecoin opponents will quickly argue that it is not as secure as Bitcoin’s confirmation (this can be argued both ways), but people don’t care when they transfer (low dollar) payments.”

Another difference in the two currencies is in the mining of the coins. Mining is the use of processing power to run a block of coins, creating new virtual money. Bitcoin mining has become rather specialized, with high-yield rigs and special chips for mining.

Litecoin asserts users will be able to make a profit mining the currency with off-the-shelf personal computers, whereas BTC increasingly demands (and inspired the creation of) high-powered, customized mining rigs. Litecoin was designed to produce four times as many coins as Bitcoin by the end of its production life cycle—84 million. The mining rewards are 50 Litecoins, vs. Bitcoin’s original 25.

Litecoin was launched in October 2011 by Charles Lee, an MIT graduate who currently works at a major tech company. Lee, heads the Litecoin Development Team, a team of six spread across the United States, Canada, the U.K., and France.

At the intersection of open-source enthusiasm and crypto-currency there are, as one might imagine, a fair number of people running their own projects on the LTC platform. With time it could rival Bitcoin in the same way that Gmail rivals Outlook or Bing rivals Google.