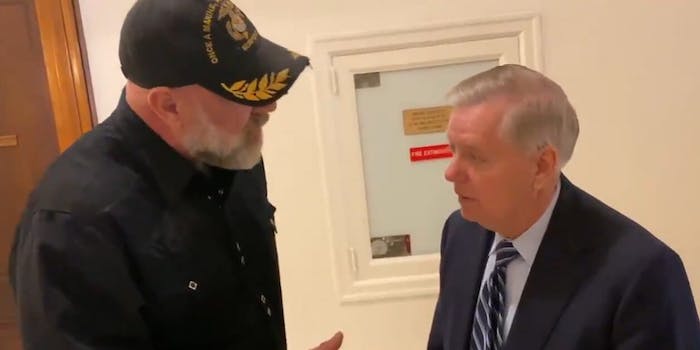 Lindsey Graham roasted for turning his back on a veteran

People think it's not a good look.

Sen. Lindsey Graham (R-S.C.) is the latest politician to get confronted by someone about his support for President Donald Trump, in a video that is going viral.

The 30-second clip begins with a man approaching Graham in the halls of Congress. Coming across as quite friendly, the man, whom Common Defense identifies as activist Jeff Key, says that he’s from Louisiana, but has a lot of friends in South Carolina.

Common Defense, an organization that represents veterans who oppose Trump, appears to have been the first to post the video. The organization previously posted a video of veterans similarly confronting Rep. Dan Crenshaw (R-Tex.).

Marine Corps Iraq Vet @JeffKey tried to have a civil conversation with Senator Lindsay Graham about our oath to defend the Constitution.

Attempting to create common ground, Key confides that he believes Graham is “berated in the press.”

“I honestly believe that you believe in our democracy as I do,” Key says. Graham agrees.

Warming to his subject, Key shares that he came to Washington, D.C. because he’s a Marine Corps veteran who served in Iraq.

Then he cuts to the chase.

“I believe that President Trump is not acting in accordance to his oath, the oath that you took and I did,” Key says.

Key, who remains extremely cordial, as does Graham, asks whether the senator took an oath.

“Yeah, I did,” Graham responds. “I don’t agree with you and I gotta go.” He then beats a path to the nearby office door.

Graham turning his back on a veteran didn’t play so well online. Many wryly noted that Republicans habitually use the military as a prop when it’s convenient, but have no qualm ignoring veterans when it’s not. Others recalled halcyon days of long ago 2016 when Graham had principles.

“The cowardice is stunning,” tweeted attorney Mimi Methvin. “How a coward responds to a patriot. Pathetic,” Fred Guttenberg added.

“This Iraq War veteran is calmly and civilly trying to have a conversation with Senator Graham. Graham *literally* turns his back on him and runs away. This is not what public service looks like,” Harrison tweeted.

His posture says everything. He’s been broken. If he had any integrity left he’d throw Trump under the bus, but he’s been gutted like a deer.

Come on vets and active duty, stop believing the LIE that gop cares about you, they do not. And stop voting for them.

GOP uses the military every chance they get, but the actual veterans? They hate them. This guy was calm, respectful, he fought for this country, he has concerns. @LindseyGrahamSC wouldn’t even listen. #veteransforimpeachment #GOPCorruptionOverCountry #VetsAgainstTrump #USMC @USMC

https://t.co/RuOSProtvX
He can not be trusted!

God Bless that veteran. I wish I could thank him. He was very respectful to Sen Graham & the Senator didn’t even have the decency to give him the time of day. Btw, Sen Graham appears to have aged significantly as of late

This is the action of a guilty man. Guilty of violating his oath, guilty of defending a criminal president, guilty of turning his back on Americans.

Four hours since it was posted, the video already has more than 500,000 views and counting.