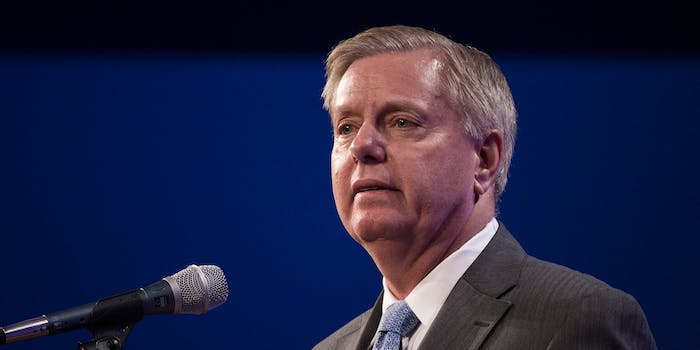 Don’t even think about joining ISIS, or President Lindsey Graham will drone you

That'll teach disgruntled young Americans to stay away from terrorism.

When you’re running for president as a Republican, outshining the rest of the field means promising a more violent response to terrorism than your fellow candidates. Sen. Lindsey Graham (R-S.C.), who is about to announce his 2016 campaign, is the current frontrunner in the all-important Hyperbolic Counterterrorism Strategy primary.

At the Iowa Republican Party’s Lincoln Day Dinner on Saturday, Graham promised a harsh response to anyone who was even thinking about joining terrorist groups like the Islamic State.

“If I’m president of the United States,” Graham said, “and you’re thinking about joining al-Qaeda or [the Islamic State] … I’m not going to call a judge, I’m going to call a drone, and we will kill you.”

Graham, one of the Senate’s top foreign policy hawks, has been beating the drums for increased military engagement with the Islamic State, also known as ISIS, ever since its creation. He has called for 10,000 American troops to fight the terrorist group and raised the possibility that Americans will “all get killed back here at home” if President Obama does not take the fight more directly to the group. He has linked the rise of the Islamic State to the Charlie Hebdo attack (“Paris on steroids”) and the Muhammad cartoon contest shooting (“a new phase in the war”).

Photo via iprimages/Flickr (CC BY ND 2.0)