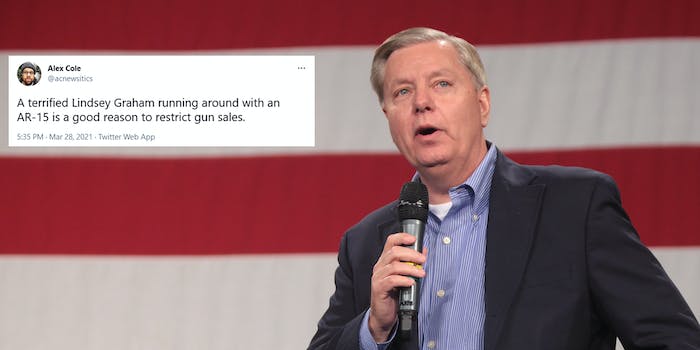 'The thought of Lindsey Graham even trying to hold an AR-15 is terrifying.'

Sen. Lindsey Graham (R-S.C.) is facing a torrent of criticism for saying that he owned an AR-15 and that he would shoot a “gang” outside of his house in a hypothetical natural disaster situation.

Graham made the remarks during an interview with Chris Wallace on Fox News. The South Carolina senator responded to a question from Wallace about the debate over assault weapons being used in mass shootings.

“There’s nothing wrong about debate. As a matter of fact, I would challenge Sen. [Chuck] Schumer to bring the assault weapons ban to the floor of the United States Senate. It won’t get 50 votes, much less 60,” Graham said. “I own an AR-15. If there’s a natural disaster in South Carolina where the cops can’t protect my neighborhood, my house will be the last one that the gang will come to because I can defend myself.”

The gun control debate has reemerged in the wake of several recent mass shootings in the country.

But Graham’s remarks about using an AR-15 to kill a “gang” of people during a natural disaster caught the attention of numerous Twitter users, who criticized the South Carolina senator.

“[email protected], the last thing my daugher saw was an AR 15 as she ran down the hallway at her school in Parkland. One shot severed her spinal cord and killed her. Are you seriously OK with announcing to future school shooters that they need an AR-15 to feel truly safe?” Fred Guttenberg, the father of a Parkland shooting victim, tweeted on Sunday.

But Guttenberg wasn’t alone. Other Twitter users also chimed in—and many were bewildered at the thought of Graham using an AR-15, as well as a senator wielding it against the people he’s supposed to help during a hurricane.