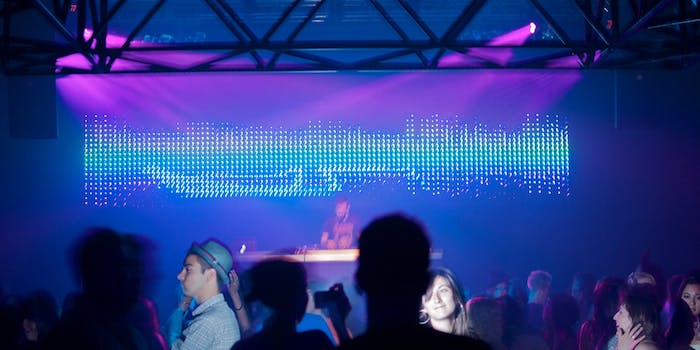 Sometimes it’s hard to tell if the crowd is raising the roof or just raising middle fingers. Lightwave will help DJs tell the difference.

The music is loud, the drinks are cold, the lights are flashing… and the crowd looks like they’re attending a seminar on tax law. The wrong song choices can ruin the mood and leave DJs out of a job, especially DJs that assume everyone is as enamored with their 16-minute EDM remix as they are.

That’s where Lightwave comes in: It’s a wearable wristband for concert-goers that tracks audience participation by measuring biometric data like temperature, movement, and audio levels.


Lightwave looks like a Nike Fuelband, but is meant for parties, not the treadmill. It’s the invention of Rana June, who gained a modicum of fame a few years ago as the world’s first iPad DJ. She’s now moved on to wearables, but wanted to emphasize that she created Lightwave as a tool primarily for artists, not data collectors.

“Lightwave is not just a data platform, it’s an artist’s tool as well,” she told the Daily Dot. “We allow artists and creators to pull the data from the wristbands to drive interactive experiences, unlock key moments, and change the environment dynamically.”


A-Trak tested Lightwave out at SXSW during a concert sponsored by Pepsi; the popular DJ didn’t particularly need the measurements, since the crowd was excited, but Lightwave could be an interesting product for musicians trying out new songs in front of large audiences, and Rana explained how Lightwave got the already-hyped-up crowd even more excited once they realized how the wristbands worked.

“Something really interesting that happened during A-Trak’s performance occurred the first time we displayed the Top 10 Active Users visualization—the leaderboard,” she said. “Until that point, people treated it like any other SXSW party, dancing a bit but also taking lots of pictures, filming the concert and using their mobile devices. Once the leaderboard came up on the screen and people realized that they were actually part of the show, they put their phones away and danced like crazy! That’s what we like to see. We believe that live events should be engrossing, and if you’re looking at your phone, you’re taken out of the experience. The simple element of competition and scoring points was really effective and, most importantly, fun.”


Of course people can have fun at concerts while standing perfectly still and staring straight ahead… but generally speaking, dancing and cheering are pretty reliable indicators that fun is being had (although, I suppose, you could be punching the air and screaming “I hate life!” and Lightwave wouldn’t know). But these bracelets could become useful crowd engagement yardsticks; if June makes them affordable for venues and sponsors, they could be used by venues to gauge who to book in the future, and artists might reply on them to test newer material. June says they will be free for users, so concert-goers wouldn’t have to pay extra to go to a Lightwave-enabled event.

Rana June didn’t specify when Lightwave will be used next, but she’s excited about forthcoming design upgrades. “We also have put a lot of work into the devices themselves. That means thinking about the form factor, comfort, style, and size of the wristbands, but we are continuously improving and are working on some amazing modifications to the Lightwave band that I think people will find very exciting.”