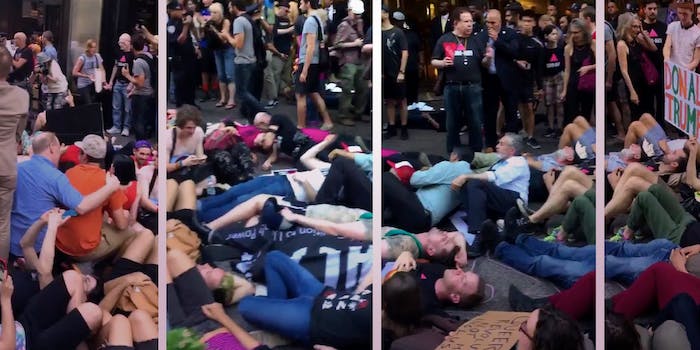 They died in the streets—inside, they interrupted Donald Trump with shouts of “your lies are killing us!”

On Tuesday night, presumptive Republican nominee Donald Trump met with the leaders of various evangelical Christian groups at his Trump Tower offices in Manhattan. But just one week after the Orlando, Florida, mass murder of 49 LGBT people at a gay bar, New York’s LGBT community staged a series of anti-Trump protests.

Both inside the meeting and outside on the street in front of Trump Tower, the message put forth by LGBT groups was clear: solidarity between LGBT and Muslim communities and an opposition to violent rhetoric and hate speech.

After Trump’s meeting with evangelical leaders, a press conference was called inside. During the press conference, two activists from the group GetEqual staged a protest that cut off Trump’s speech. GetEqual co-directors Angela Peoples and Heather Cronk—who also took responsibility for interrupting President Barack Obama’s Pride reception in June 2015—heckled Trump with cries of “Take responsibility for Orlando” and “Your hate is killing us” before being dragged out of the event by security.

“The incisive hate-mongering of Donald Trump and right-wing religious ‘leaders’ is responsible not only for the massacre in Orlando, but also for the systemic violence that trans and queer people of color face everyday,” said Peoples in a statement emailed to the Daily Dot.

“That violence doesn’t just happen in the streets or at nightclubs,” Peoples continued. “It happens in the legislative chambers, where right wing politicians have passed over 250 bills restricting the rights of LGBTQ people and people of color.”

In a video posted to the GetEqual Facebook page, Peoples can be seen following and heckling Tony Perkins, president of the “pro-marriage and pro-life” lobbying firm Family Research Council.

As Peoples and Cronk heckled Trump inside the building, ACT UP’s New York chapter held a protest on the sidewalk. The protesters loudly chanted “Act up! fight back!” and held signs with Trump’s image that read “My hate kills.”

"Act Up! Fight Back!" at Trump Tower protest NYC. https://t.co/hLErRBFtyA

Anti-Trump protesters lay down on the sidewalk outside Trump Tower (this protest has been going on for over an hour) pic.twitter.com/fEP8WZtEkz

In a press release, ACT UP NY members explained why they chose Trump’s meeting with evangelicals to stage the protest.

“Just over a week after the slaughter of dozens of LGBTQ people at Pulse in Orlando, Donald Trump is seeking the support and the endorsement of groups who have—for decades—advocated hatred, discrimination, and violence against our community,” said James Krellenstein, a member of ACT UP NY. “By continuing to embrace, rather than condemn these hate groups, Donald Trump and the Republican Party are spitting on the victims of the Orlando Massacre.”

The LGBT community’s strong opposition to Trump gained visibility after the Republican frontrunner tweeted about the Orlando shooting on June 14, just two days after the massacre. Many found Trump’s promise to “fight for” LGBT people offensive, and one 19-year-old Twitter user replied with the hashtag #LGBTQHatesTrumpParty, which quickly went viral.

Tuesday’s ACT UP protest highlighted the relationship between the already-marginalized Muslim and LGBT communities. Protesters held signs reading “Love has no borders” and “White supremacy kills.”

“The LGBTQ community is a rainbow coalition of races and religious beliefs,” said ACT UP NY member Tom Blake in a statement emailed to the Daily Dot. “While we stand united against any kind of religious bigotry, we will not stand silent while our Muslim LGBTQ brothers and sisters continue to be targets of hate speech.”