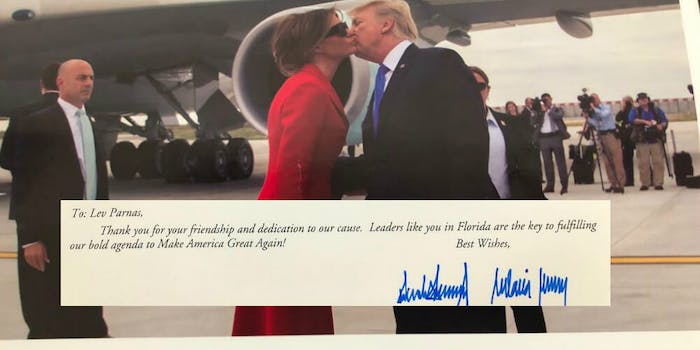 Lev Parnas’ private Instagram account reveals that the Rudy Giuliani associate–who was indicted for illegal Republican campaign donations and helped try to get Ukraine to investigate the Bidens–has longtime ties to President Donald Trump himself.

The Wall Street Journal gained access to the private Instagram account, which contains photos of and relating to Trump. In October 2015, Parnas posted a photo of himself, his son, and Trump.

“Let’s go Trump. Next president and future president !!!!” the caption reads, per the WSJ.

In August 2018, Parnas shared a thank you letter he received from Trump.

“To Lev Parnas, Thank you for your friendship and dedication to our cause. Leaders like you in Florida are key to fulfilling our bold agenda to Make America Great Again!” the letter, which was signed by Trump and First Lady Melania Trump, reads.

Then, his account jumps from 2015 to 2018. In Aug '18, Parnas posted a pic of a personalized thank-you note from POTUS & FLOTUS. “Lev Parnas, Thank you for your friendship and dedication to our cause,” it reads. WH didn't respond to request for comment. https://t.co/oXcW96zdhb pic.twitter.com/b0DXz3Pn6x

Parnas also posted photos of himself with Trump’s legal team at a “celebration dinner” after William Barr released his Mueller report summary. “Congratulations team trump !!!” the caption reads, per the WSJ.

In other photos, Parnas can be seen with Donald Jr. Trump, Eric Trump, Ivana Trump, and Giuliani.

Parnas, along with Fruman, facilitated Giuliani in trying to get Ukraine to investigate presidential candidate Joe Biden and his son, Hunter Biden. The move kicked off an impeachment inquiry into Trump.