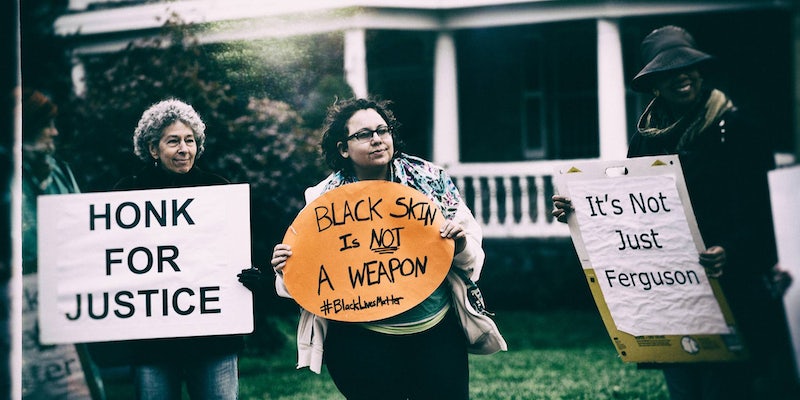 The project is helping people of all ethnic and cultural backgrounds talk to their families about why Black Lives Matter.

Claiming solidarity and awareness of racial justice in this day and age requires an understanding of Black Lives Matter and the protests over police violence against black and brown people that have swept the nation.

For people who already have that understanding?even driven, impassioned activists who care deeply about the issues?it can still be a difficult and emotionally daunting process to explain the importance and urgency of it all to unreceptive family members or loved ones. Even more so when there are sharp divides present, whether they’re linguistic, cultural, or generational.

Which is precisely where Letters for Black Lives come in. The effort was launched last week by Christina Xu, an Asian-American ethnographer and writer based out of New York City. In response to an early (ultimately incorrect) perception that the police officer who fatally shot Philando Castile in Minnesota might have been Asian-American, Xu tweeted that she wanted to craft an open letter about Black Lives Matter, one that Asian-Americans with immigrant families could use to help bridge linguistic and cultural divides.

Specifically, she tweeted that Asian-American BLM supporters needed to get out ahead of any of their communities rallying behind the officer who killed Castile, in the same manner that happened after the fatal shooting of Akai Gurley by Asian-American NYPD officer Peter Liang in 2014.

Asian-Americans who support BLM, we need to get ahead of our community organizing another pro-Liang rally. Talk to your families today.

In fact, let’s draft letters in our native languages to our parents and our communities. Get it passed around WhatsApp, WeChat, LINE, etc.

When reached for comment, Xu was reluctant to discuss or emphasize her own role in the story, preferring to focus on the movement itself. And in fairness, it’s not hard to see why: The scale of what Letters for Black Lives is now attempting is impressive in its scope and universality. Initially conceived as an open letter that could be used to appeal to people in different Asian-American communities, it’s now taken off to the point that people are working on translations, bringing the letter into dozens upon dozens of different languages.

There are now letters in support of black lives available in English, Arabic, Japanese, Chinese (simplified and traditional), Farsi, German, Thai, Spanish, Bengali, and Brazilian Portuguese, to name a few. The project is currently seeking more people with translation skills, to expand the list even further.

If you’re curious to see what the letter looks like in English, you can find it here. Here’s a brief excerpt, which confronts the memory of the Peter Liang protests.

“In fighting for their own rights, Black activists have led the movement for opportunities not just for themselves, but for us as well. Black people have been beaten, jailed, even killed fighting for many of the rights that Asian Americans enjoy today. We owe them so much in return. We are all fighting against the same unfair system that prefers we compete against each other.
When someone is walking home and gets shot by a sworn protector of the peace—even if that officer’s last name is Liang—that is an assault on all of us, and on all of our hopes for equality and fairness under the law.”

As a gesture of solidarity and a move towards expanding awareness of racial justice in various communities (especially the recently immigrated, as the letter speaks directly to that experience), Letters for Black Lives is both a heartening project and a truly practical one. Beyond the basic question of how to start any conversation about such loaded, sensitive topics?institutional and historically-rooted racism make up what’s probably America’s hottest, most crackling third rail?it also tries to provide an accommodating and caring message, one that could potentially sway hearts and minds when spoken to a loved one.

If you’re interested in getting involved in any capacity, whether translating, reading for audio or video, or  working on crafting new versions for new communities, you can check out the Letters for Black Lives website to see what the project needs.