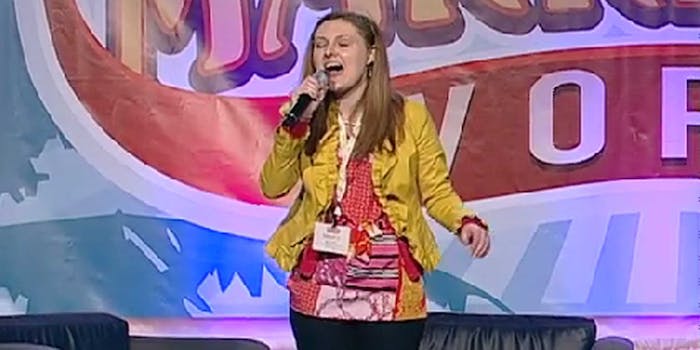 Meet the man who wrote ‘Let’s Get Social’

"My only failure was not pointing out that the lyrics were intended to be comical and not serious.”

By now, you’ve likely heard “Let’s Get Social,” the “Friday” of the media industry.

Performed by Continuum Marketing’s Mary McCoy at the Social Media Marketing World conference, the song features a call-and-response chorus, a weird rap, and lyrics about networking. Valleywag described it (accurately) as a descent into hell.

“My cat, my kids, some bacon” is now a mocking, echoed phrase flying across our screens.

We had to know more about it. Where did this thing come from? Do the creators know what they did? We talked to one of the brains behind ‘Let’s Get Social’ about the the mild vitriol the song has created.

“I did take offense at first, but then I realized that people were making fun of something they didn’t understand,” Phil Mershon tells me via email. He wrote the lyrics for “Let’s Get Social” and introduces McCoy at the beginning of the video.

“It’s hard to reproduce a live experience and the context people had for the song. My only failure was not pointing out that the lyrics were intended to be comical and not serious.”

Mershon is the director of events for Social Media Examiner, and also has a long history in music. He’s a saxophonist and songwriter who’s been performing for more than a decade.

Mershon says he wrote the “Let’s Get Social” with some outside input, and that he put some time into it, but “it wasn’t something [he] focused on for dozen of hours.”

In fact, he says, McCoy was given a background track to practice with on her own, but they only ran through it three to four times on the morning of the performance.

And it was, in fact, well-received… outside of Twitter, at least.

“In general, people at the conference enjoyed the song,” he says. “It was a lighthearted morning as people were waking up, a chance to laugh at some of the things marketers try to get attention on social media.”

Mershon says the audience “was completely engaged. Many were taking selfies, and they got the inside humor that I was poking fun at how many social media marketers behave. It was some tongue-in-cheek fun intended to warm the audience up for the conversation about ‘Have we lost the social in social media?’”