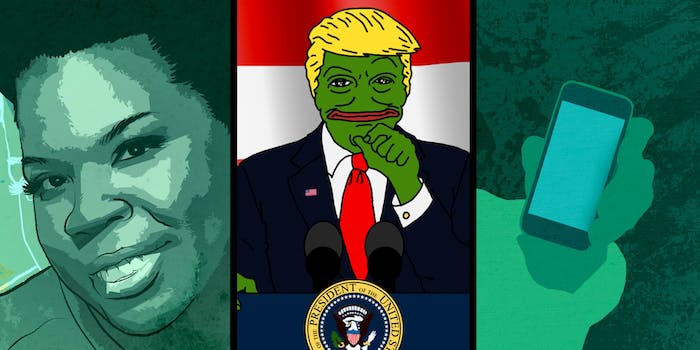 Important news you may have missed on Thursday, Aug. 25.

Apple has patched a serious flaw in iOS that left its devices vulnerable to spying. To correct the issue, you should update to version 9.3.5 immediately. The security flaw was first detected by Citizen Lab and Lookout, a mobile security firm, who discovered a piece of malware that could essentially intercept every call, text message, and email from your device.

A new academic study suggests that formal privacy notifications actually decrease the amount of trust users have in a website. “The mere inclusion of a statement about privacy notices—which systematically varied between conforming to, not being mentioned in, and violating the privacy notice—decreased the average trust rating of the vignettes,” wrote one researcher.

That “Vagenda of Manocide” meme—if you’re unfamiliar, see yesterday’s coverage—has become a fundraising tool for the Clinton campaign, though it’s unclear if any actual Clinton staffers are behind the VagendaOfManocide.com website, which now redirects to the Democratic candidate’s donation page. (There’s also some pretty rad death-metal font T-shirts up for sale, proceeds from which go to benefit the National Network of Abortion Funds.)

A new Clinton campaign ad focuses on the numerous endorsements Donald Trump has received from white nationalist organizations, such as the Ku Klux Klan. And there was no shortage of material: Trump’s message on immigration and prohibiting Muslims from entering the U.S. have greatly resonated with the country’s most virulent racists.

Many people cheered the downfall of Gawker last week, but issues of free speech surrounding the case are far more complex than personal feelings about the publication. Trevor Timm, executive director of the Freedom of the Press Foundation, has a list of questions for those applauding the website’s demise.

Security-wise gamers will be excited to learn that Sony has rolled out two-factor authentication for Playstation 4. If someone who is not you attempts to steal your account, they won’t get very far (unless they’ve also stolen and unlocked your cellphone.) Parsec’s Dennis Scimeca will walk you through the process of setting up this essential feature.

After touting its profitability earlier in the year, Uber is now showing at least $1.2 billion in losses after the second quarter, writes Debug’s John-Michael Bond.

Before becoming Indiana’s governor and Donald Trump’s running mate, Mike Pence used to draw some pretty strange cartoons. Now you can enjoy them, too, via Unclick’s Nayomi Reghay.

The hackers who targeted comedian Leslie Jones, defacing her website, and posting unauthorized nude photo, could face more than 30 years in prison if captured. Here’s a breakdown of all the charges the hackers may face.

We love you too, Leslie.

A pack of endangered gray wolves in Washington are about to be hunted down and killed because they’ve attacked a dozen cattle this year, the state’s Department of Fish and Wildlife has confirmed. —via Kaleigh Rogers, Motherboard

Learn more about the unprecedented iPhone spying tool uncovered today that left the data of millions vulnerable to spies. —via Lorenzo Franceschi-Bicchierai, Motherboard

Hillary Clinton issued a strong defense of the Clinton Foundation on Thursday during her first national news interview in nearly a month. —via Theodore Schleifer and Dan Merica, CNN

Trump’s wavering over immigration has left him between a rock and a hard place. His right wing supporters weren’t too happy after he suggested his hardline stance on deporting 11 million people was actually malleable. —via Maggie Haberman and Michael Shear, the New York Times