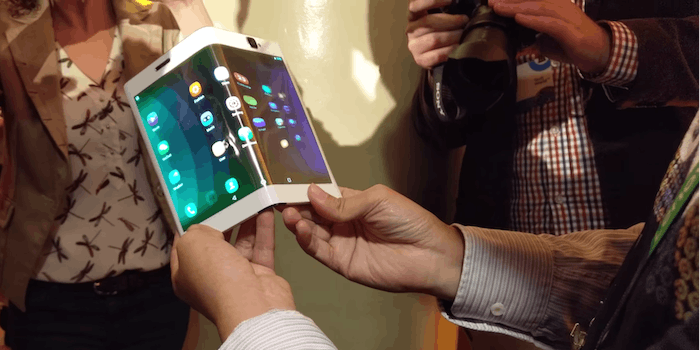 There is no release date or price for the concept device.

Foldable phones have been teased by the big mobile players countless times over the past few years, but companies have left it up to consumers to imagine what these mythical devices might look like—until now.

At Lenovo Tech World last week, the Chinese tech powerhouse unveiled Folio, a tablet with a flexible screen that allows it to fold into a pocketable dual-screen smartphone. You can watch the magic unfold in this hands-on video posted to YouTube.

Unfortunately, the Folio is just a concept, which means it probably won’t be released this decade, if at all. But Lenovo seems to be on to something. As you can see in the video, the hybrid mobile device easily switches between a 7.8-inch tablet and 5.5-inch phone. That might not seem like a big jump, but those are almost the exact dimensions of the iPad Mini and iPhone 7 Plus. The Folio even has a Galaxy-like “Edge display” when placed in smartphone mode.

There are some awkward growing pains with the concept. One big concern is that the back of the device becomes a screen when folded, which could cause comfort and/or durability issues. It’s similar to the problem Windows laptop manufacturers ran into when they first started making 2-in-1s—nobody wanted a dead keyboard on the back of their tablet. The Lenovo rep does point out that the second display can be used as a sort of camera viewfinder for the people around you. That’s a nice feature, but I’m not convinced it’d be worth the hassle.

We have no word yet on pricing, though I can’t imagine how much it’d run in today’s market considering the price of research and development for flexible screens and the beefy specs found within the device, which include a Snapdragon 800 processor and 1,920-by-1,440 resolution display.

Lenovo isn’t the only one working on this concept. Korean giants Samsung and LG are both rumored to release a foldable smartphone by the end of 2017.