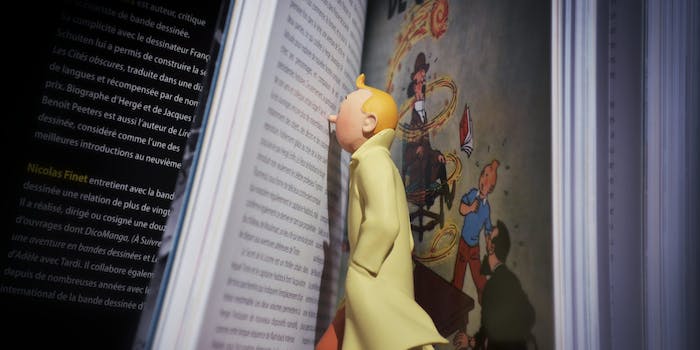 People are sharing the art to share their grief.

Soon after today’s terror attacks in Brussels, Belgium, in which at least 26 people are confirmed dead, a cartoon uniting France and Belgium has already become the symbol of solidarity for the victims.

As with the Paris terrorist attack from last November, people have started sharing a cartoon by Le Monde cartoonist Plantu, who has drawn other cartoons showcasing grief from the Charlie Hebdo attack in January 2015 and the Paris attack. The cartoon shows the French flag comforting the Belgian flag and crying with the dates of their respective attacks underneath: Nov. 13, 2015, and March 22, 2016.

The cartoon has become a way for people to share their condolences for the victims of the Brussels terror attacks, and someone has already placed the cartoon at the memorial for the Paris attacks at La République.

We condemn #Brusselsattack. Our thoughts go to the victims, the wounded and their family & friends #JeSuisBelge pic.twitter.com/2MeER1ndcC

It’s already received a remix courtesy of the Russian TV outlet LifeNews, which has replaced the French flag with the Russian flag and Oct. 31 underneath to commemorate the crash of a Russian airliner in Egypt that killed all 224 people on the plane, which Russia has since said was an act of terror.

A number of hashtags have popped up on Twitter uniting people in solidarity such as #JeSuisBelge (“I am Belgian”), #JeSuisBruxelles (“I am Brussels”), and #prayforbelgium.

My heart broken for Bruselas. Sending with love to all victims, people and family. #JeSuisBelge pic.twitter.com/MGOAhULxmb

All our thoughts are in Brussels on this sad day… #PrayForBelgium pic.twitter.com/hl88cXXSBE

People have also begun to share photos of the famous Belgian cartoon character Tintin crying to share their grief with others.

Facebook has enacted its Safety Check feature in Brussels, allowing those in the city to let their friends and family know that they are safe.

The city of Paris, which has changed its Twitter profile picture to the Belgian flag, has announced that it will light the Eiffel Tower with the flag’s colors.