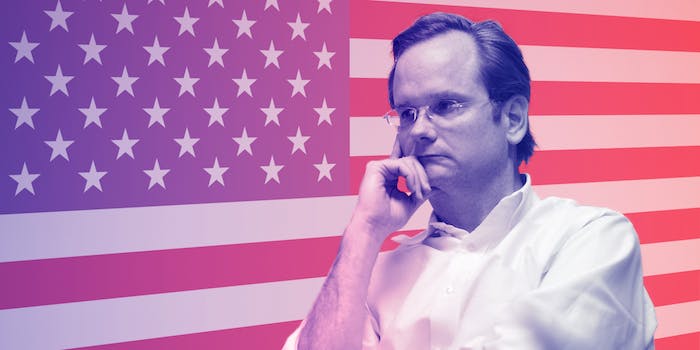 Lawrence Lessig wants to turn the 2016 election upside down

This would truly change America.

Creative Commons co-founder and political activist Lawrence Lessig is forming a committee to run for president, he announced on Tuesday. And he has a plan to flip American politics on its head.

Lessig, a Harvard law professor and a noted critic of secret campaign contributions, would run as a Democrat—but not the typical Washington breed.

Instead of trying to stay in power for two terms, Lessig would remain president only for a short time, enough to accomplish his one major goal: his referendum, as he put it in an op-ed in the Huffington Post, which would covers making it easier to vote, ending gerrymandering, and getting big money out of elections. He would then resign, he says.

Lessig would remain president only for a short time, enough to accomplish his one major goal

So, in effect, Lessig wants to become president only to patch up what he sees as a a few glaring holes in the U.S. political system, and then hand the reigns over to Hillary Clinton, Sen. Bernie Sanders (I-Vt.), or whomever he’d chosen as his running mate.

It would be a revolutionary idea if it worked; the only sitting U.S. president to ever resign was Richard Nixon after the Watergate scandal. In his video explaining his idea, Lessig refers to it as a way to “hack the system.”

If elected, such a person would be less of a president and more of a “trustee for the people,” he says, and it would put overwhelming pressure on Congress to pass a bill to fix those three problems so that it could get him out of the way and back to a more conventional system.

Interestingly, Lessig reportedly is only pursuing this campaign because he was unable to convince a handful of popular figures, including recently retired Daily Show host Jon Stewart and former New York City mayor Michael Bloomberg, to try it themselves.

Lessig’s announcement is something of a test run. Somewhat reminiscent of his Mayday PAC, a political action committee designed to raise money for sponsors who would fight the dominance of super PACs in U.S. elections, Lessig is asking to crowdfund a million dollars for his campaign. If he gets it by Labor Day, he says, he’ll run; if not, he’ll drop out and return the money.