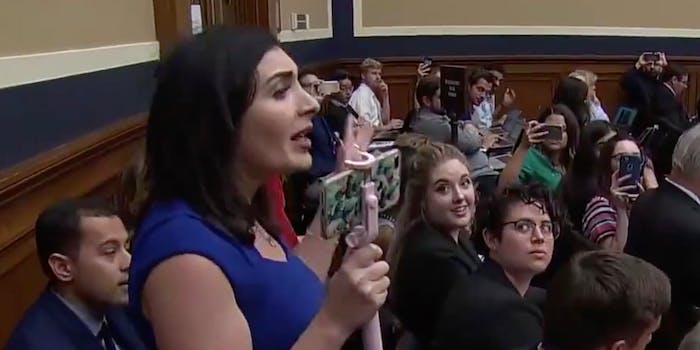 The company appears to claim that she violated its rules.

Right-wing activist Laura Loomer has reportedly been suspended from Twitter.

In a post on her Facebook page, Loomer said the social media site had suspended her account until next week, after the 2018 midterms will be over.

“Over the last few months, we have all seen and experienced first hand the liberal bias of Big tech social media companies like Twitter and Facebook,” she wrote, later adding: “Conservatives like myself are being silenced and censored by Big tech. There is nowhere for Conservatives to go. We are being banned online in the middle of the midterm elections simply because we are conservative. Put simply, this is ELECTION MEDDLING.”

In a screenshot shared with Loomer’s post, the social media site said her account was suspended for violating its rules. It did not specify which rules she broke.

In the post, the conservative writer mentioned how she confronted Twitter CEO Jack Dorsey during a congressional hearing in early September.

During the testimony, where Congress asked him about conservative users’ claims of being “shadow banned,” Loomer shouted and made a plea to President Donald Trump and accused Dorsey of trying to “steal the election.”

“In September, I confronted Jack Dorsey during the social media hearing in Congress,” she wrote. “I pleaded with President Trump to help us, to do something before it was too late. I spoke for millions of Americans when I said we are being silenced and shut down by liberals in Silicon Valley in an effort to influence the election, so the Democrats could STEAL THE ELECTION.”

What @Twitter rules did @LauraLoomer violate?
The unwritten rule that you can't use @Twitter to effectively expose crapweasels through citizen journalism & actually make a difference at the ballot box 1 week out from midterms.
Also @jack – Why is @Twitter silencing women? https://t.co/lATbFwp0D8

They are pulling out all the stops.

Loomer was previously suspended from Uber for demanding a non-Muslim driver in the wake of a terrorist attack in New York City.