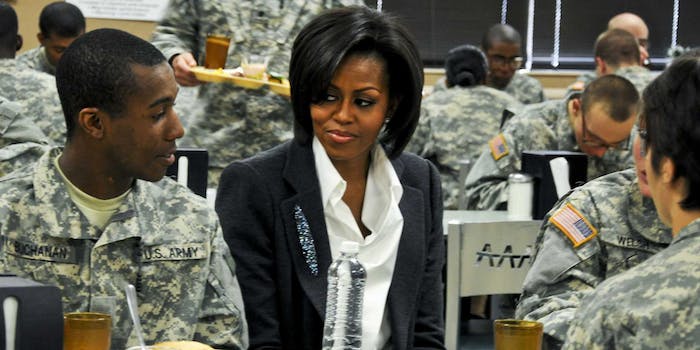 Why the Web thinks Michelle Obama is bald

'Jeopardy!' clue has the commons wondering where the first lady's hair went.

The Obamas are no strangers to conspiracy theories. We’ve heard everything from the Obamas secretly being Muslims to the president actually being born in Kenya. These speculative accusations gained traction online and the latest is no exception: Michelle Obama is bald.

OK, so it’s not really that serious of a conspiracy theory. But thanks to a weirdly shot series of video clues on Jeopardy! Tuesday, many on Twitter were left asking what happened to the first lady’s hair when it appeared she suddenly had none.

The questions began during Tuesday’s broadcast. The show dedicated an entire category to healthy eating and the first lady read the clues in pre-taped videos as part of a tie-in to her Let’s Move campaign to curb childhood obesity.

According to the Hill, a combination of lighting and a tightly pulled back hairdo most likely made the first lady’s hair and forehead appear to be the same color, giving the allusion of baldness.

“[The Hill] is surmising this mane mystery is more a case of a quirky camera angle and lighting than Obama opting to be the first first lady to debut a chrome dome,” the publication’s Judy Kurtz wrote.

So, there we have it, another case of a political figure trying to promote a serious message only to have social media get sidetracked by some weird physical quirk or meme (think Marco Rubio and his water bottle a few years ago or pretty much anytime Joe Biden is near a camera).

And although this is certainly one of the weirder Internet “theories” about the first lady, it’s definitely not the most bizarrely baseless one out there.