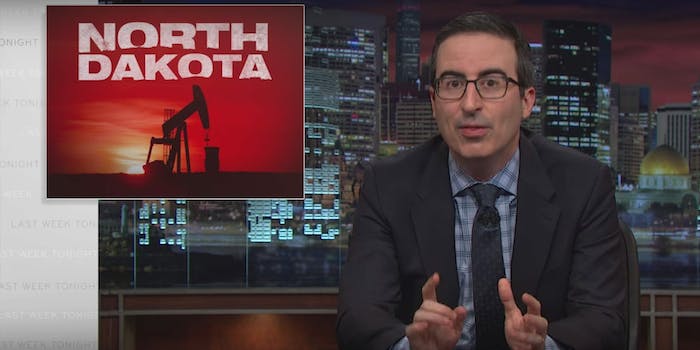 'Dangerously unregulated' and 'oil well' are not phrases you want to hear in the same sentence.

If you don’t know much about the North Dakotan oil industry, don’t feel too bad. As even the North Dakotan tourist board admits, the state is often the last one people visit or even think about. Unfortunately, that may be why its recent oil boom is so lacking in oversight.

As John Oliver revealed on the latest Last Week Tonight, North Dakota’s oil industry is disturbing unregulated and in many cases terrifyingly unsafe. One news report put the death toll at one oil worker every six weeks, a figure that surely should have resulted in better health and safety standards.

But it didn’t. The oil company in question, Oasis Petroleum, circumvented those health and safety regulations by employing outside contractors at its facilities, meaning that Oasis itself wasn’t technically responsible for workplace accidents. And that’s far from the worst of North Dakota’s oil problems.