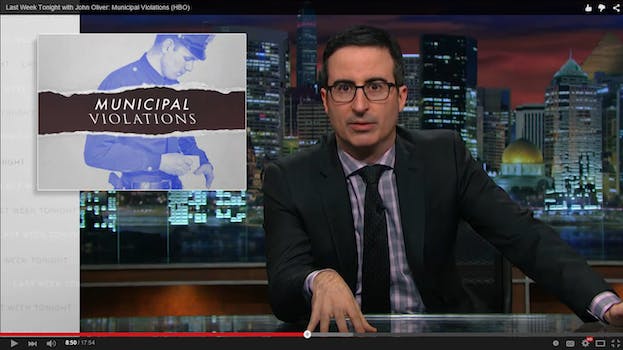 John Oliver’s segment on overzealous city fines will infuriate you

Municipal fines are out of control. No one should have to lose their livelihood over a speeding ticket.

Municipal violations are misdemeanors like loitering, public urination, and speeding. The usual punishment is a fine, but for many people, even a meager fine is impossible to pay off given their circumstances. And if you can’t afford the fine, then you definitely won’t be able to pay all the additional charges that local governments often attach to the original payment.

The end result is something Oliver describes as a “hamster wheel of Hell,” as people struggle to repay endless surcharges or face arrest. In some cases, it can ruin lives.

The segment ends with one of Last Week Tonight‘s signature parody PSAs, demanding that local governments “shut down the f**barrel” of unfair municipal fines.

After all, everyone makes mistakes, and no one deserves to lose their entire livelihood over something as petty as a speeding ticket.