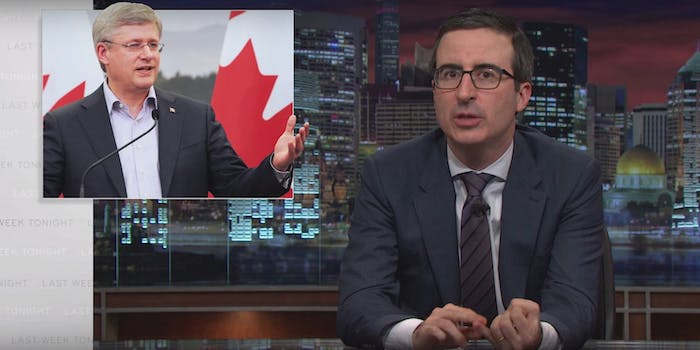 It's kind of comforting to learn that Canada's elections are almost as embarrassing as our own.

With every new presidential election, more and more Americans threaten to move to Canada if their preferred candidate loses.

Little do Americans know that Canada is in the midst of a similarly important election right now—one that’s almost as embarrassing and scandal-prone as our own. In one truly beautiful scandal, a Conservative candidate was filmed peeing into a homeowner’s coffee cup during his day job as an appliance service technician. If you thought that was the perfect fodder for a Last Week Tonight segment, you were right.

On Sunday night’s show, John Oliver found plenty of material to work with as he explained the Canadian election to his American audience. He primarily took issue with Canadian Prime Minister Stephen Harper, whose anti-Muslim policies have become increasingly unpleasant.

Oliver wanted to do something, but because of a Canadian law prohibiting foreigners from publicly influencing the outcome of its elections, he found himself caught between a rock and a hard place. He wanted to tell Canadians not to vote for Harper, but in doing so, he would risk jail time. In the end, he threw caution to the wind and did it anyway—with some help from famed Canadian Mike Myers.