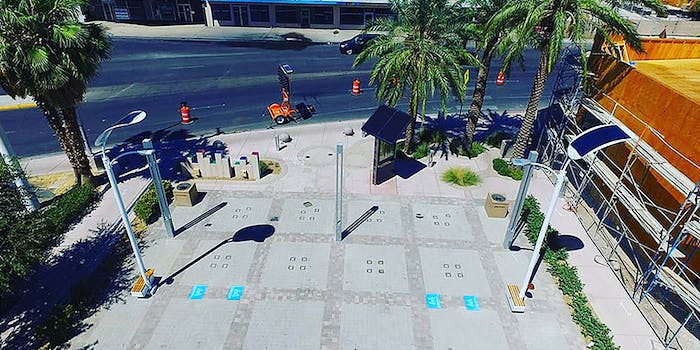 These futuristic streetlights are powered by foot traffic and solar panels

These steps will make you feel like Michael Jackson in 'Billie Jean.'

As the world grapples with how to wean ourselves off of fossil fuels, one New York-based startup has a novel idea for powering streetlights.

EnGoPlanet has installed four streetlights in a Las Vegas plaza that are powered exclusively by solar and kinetic energy from foot traffic. In addition to the streetlights, the experimental power grid provides juice for a video surveillance, USB charging ports, Wi-Fi, and environmental monitors in the plaza.

Each of the streetlights features a solar panel on top and is surrounded by kinetic tiles for people to walk on. Depending on the amount of pressure applied, walking on the tiles generates 4 to 8 watts of power, which is stored for use in the evening. While these tiles might not be useful in cities where cars are the main method of transportation, in a city like New York, Hong Kong, or Chicago, these tiles could bode well for a future where our feet power our streetlights.

According to EnGoPlanet, there are over 300 million streetlights around the globe, producing 100 million tons of CO2 and costing cities $40 billion a year. While it remains to be seen if this kinetic/solar mashup will prove successful in Las Vegas, the idea of streetlights with USB power and Wi-Fi powered by our feet is an exciting one.