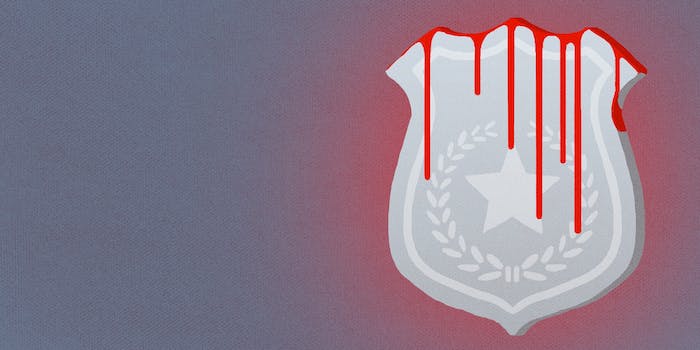 The officer has been charged with first-degree murder.

Officer Jason Van Dyke’s fatal shooting of 17-year-old Laquan McDonald occurred in October 2014. At the time, police insisted that Van Dyke shot the teenager after he ignored instructions to put down a knife he was allegedly using to slash car ties. An attorney representing the victim’s family charges that McDonald was facing away from Van Dyke when he was shot 16 times.

On Tuesday morning, Van Dyke was formally charged with first-degree murder. Cook County State’s Attorney Anita Alvarez noted that the charges against Van Dyke were filed earlier than expected as a way to get out in front of the video, which was legally required to be released under a court ruling in favor of freelance journalist Brandon Smith, who filed a request for the department to turn over the video under the Freedom of Information Act.

The website where Chicago officials made the video available for media to download crashed repeatedly Tuesday evening as visitors rushed to access the footage. Some outlets were able to access the video before the site became overloaded.

“Today’s about accountability,” Chicago Police Superintendent Garry McCarthy said during a press conference on Tuesday afternoon. “We’re all accountable for our actions.”

Talking to media ahead of the video’s release, Alvarez warned about the disturbing content in the video. “It is graphic, it is violent, it is chilling,” she told NPR, adding that she wanted Chicago residents to know that Van Dyke is “being held accountable for his actions.”

The document listing the charges against Van Dyke notes that “[the] defendant was on the scene for less than 30 seconds before he started shooting, in addition to the fact that he starts shooting approximately six seconds after having gotten out of the car.”

The charging document continues: “None of the officers observed McDonald attempt to throw his knife at defendant, jump or lunge toward Van Dyke, raise his knife as if to stab defendant, or did anything that was obviously threatening toward defendant beyond what was depicted in the video and not responding to commands while carrying a knife.”

These charges mark the first time in over three decades a police officer in Chicago has been charged with first-degree murder. Van Dyke turned himself in shortly after the charges were announced. He is being held without bail.

“Police officers are entrusted to uphold the law, and to provide safety to our residents,” Chicago Mayor Rahm Emanuel said in a statement earlier this month. “In this case unfortunately, it appears an officer violated that trust at every level.”

A federal investigation into the incident is also ongoing.

The footage released Tuesday, which was captured by the dashcam on Van Dyke’s police cruiser, was reportedly not the only video taken that could provide details regarding the incident. NBC reports that, immediately following the shooting, a handful of police officers entered the Burger King near where McDonald was shot and asked to view the security camera footage from the restaurant’s exterior cameras. When an investigator for the Independent Police Review Authority viewed the footage the next day, 86 minutes of video were missing.

In April, the city of Chicago agreed to pay McDonald’s family a $5 million settlement.

An investigation by the New York Times revealed that numerous members of the public had filed formal complaints against Van Dyke over excessive force and use of racial slurs. However, none of those complaints were ever sustained.

The Chicago Tribune reports that the city’s police department has ordered nearly all of its officers into uniform in preparation for the potential of large-scale civil unrest. “We are prepared for demonstrations, let’s put it that way,” McCarthy told the Tribune. “My mantra is going to be the same one that it always is, which is really simple. We’re going to facilitate and protect people’s First Amendment right to free speech and we’re going to be intolerant of criminal behavior.”

In a public statement released Tuesday, McDonald’s family called for calm. “No one understands the anger more than us but if you choose to speak out, we urge you to be peaceful,” the McDonald family said. “Don’t resort to violence in Laquan’s name. Let his legacy be better than that.”

“I believe this is a moment that can build bridges of understand rather than become a barrier of misunderstand,” Emanuel said at Tuesday’s press conference. “I understand people will be upset and want to protest when they see this video,” he added. “It is fine to passionate, but it is essential that it remain peaceful.”

Rev. Michael Pfleger, a prominent local activist, has urged his parishioners to protest the shooting by staging a march aimed at disrupting traffic along North Michigan Avenue on Black Friday, one of the city’s busiest retail corridors on the biggest shopping day of the year.

If convicted on the first-degree murder charge, Van Dyke faces a potential sentence of 20 years to life in prison.