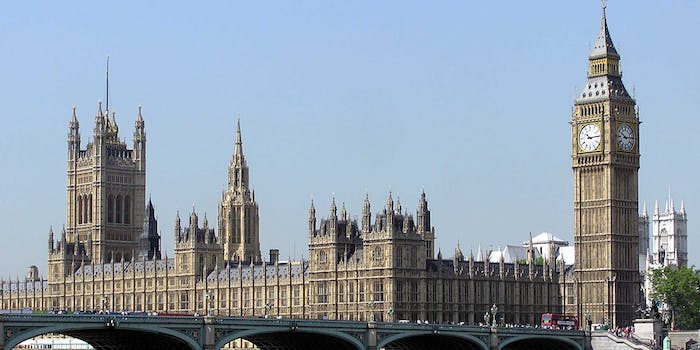 One of the U.K.'s leading political parties is rejecting membership applications over fears of infiltration.

While the U.S. wades through a swamp of unwanted GOP presidential contenders, the U.K. is experiencing an equally embarrassing political quagmire.

After losing the general election in May, the leader of the center-left Labour Party stepped down. The resulting leadership election is being held this month, and it has already led to a lot of public infighting among Labour politicians. It also inspired a rush of people trying to join the party in time to vote for a new leader, to the point where Labour is actually rejecting some membership applications.

To vote in the leadership election, you had to either join the party or pay a £3 ($4.70) supporting fee before Aug. 12. But thanks to a surge in applications, some Labour officials were concerned that outsiders were trying to hijack the election for nefarious purposes.

About 1,200 people (out of 400,000 new voters) were rejected before the deadline, but this week has seen more reports of people being blocked from joining the party. Many of these aspiring Labour voters claim they were “purged” for being too left-wing—including some who have supported the party for years, such as comedian Mark Steel.

Well – an e-mail from Labour says my application has been rejected as I 'don't support their values'. Maybe I was meant to invade Iraq.

This concern over election “entryists” was inspired by the influx of support for Jeremy Corbyn, a staunchly left-wing candidate who is now leading the polls by 32 points. Backed by several prominent labor unions and known for his criticism of austerity and nuclear weapons, Corbyn is essentially the U.K.’s answer to Bernie Sanders, the Independent Vermont senator and 2016 Democratic challenger to Hillary Clinton.

Corbyn’s supporters believe he is the only candidate who can steer Labour to the left and provide an effective opposition to the Conservative government. However, most prominent politicians from the Labour establishment—including former Prime Ministers Tony Blair and Gordon Brown—argue that Corbyn is too extreme to lead the party to victory in a general election. Blair recently published open letter saying that the party faces “annihilation” if Corbyn is elected.

This type of rhetoric led to a suspicion that people might infiltrate Labour from both sides of the debate: Conservatives secretly joining and voting for Corbyn in an attempt to destroy the party from within, and left-wing activists trying to skew the party toward a more radical agenda. Hence the #LabourPurge, weeding out applicants who “do not support the aims and values” of the party.

The fact #LabourPurge is even happening shows exactly why @UKLabour urgently needs to change. Desperate, disgraceful, and backfiring badly.

Good grief, Labour is eating itself. I'm not even a party member and this is embarrassing #LabourPurge

Any news if Tony Blair has been expelled from the Labour Party yet for opposing party values? #LabourPurge pic.twitter.com/QS2fwFFLRR

While a handful of people have admitted to joining Labour with an ulterior motive, the purge seems to be doing more harm than good. Twitter is full of longtime Labour supporters whose membership was rejected this week, or new members who were turned down because they used to be affiliated with another party.

Labour Party have also kicked my wife out. Full member, voted Labour last time out. Never been a member of another party. @UKLabour explain!

I am a Labour supporter. The Labour Party owes me an apology – and a vote in the leadership election. #LabourPurge pic.twitter.com/l6Nv7j6rqz

Student Rosie Fletcher told Channel 4 News that she believed her application was rejected because she previously left the party but decided to rejoin after the 2015 election.

Well now this is awkward. You go on television to talk enthusiastically about being a Labour member and then they reject your membership.

The belief in an unfair “purge” has gained so much traction that one man is compiling a survey of rejected applications.

So far, Labour is defending its “robust system” of protecting against malicious membership applications and election fraud. But given the number of Labour supporters claiming to have been rejected, it doesn’t seem to be working as planned.