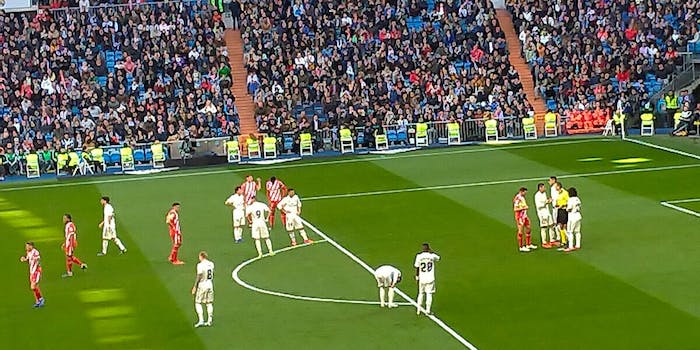 Popular soccer app fined for spying on users through their phones

A popular soccer app activated the microphones of its cellphone users in order to catch bars broadcasting games without a license.

The La Liga app’s intended use is to provide La Liga fans with player information, game times, and other La Liga Soccer League information. Yet it was misused by the league to catch drinking establishments airing pirated games, according to Spanish newspaper El País.

Once a user’s microphone was turned on, the app would listen to background noise to determine if a soccer game was being played on a nearby television. The app also knows when its millions of users are watching games and where they are watching them. So it then checked the users’ location to determine if they were at a bar that didn’t purchase a license to watch league matches.

La Liga has defended itself by pointing to the fact that its users were aware of both the locating and microphone function–and were even given the ability to opt-out of the two functions. The app’s terms of service do mention the controversial spying feature, according to Gizmodo.

“If you accept the specific and optional box enabled for this purpose, you consent to the access and use of your mobile device’s microphone and geopositioning functionalities so that LaLiga knows from which locations football is being streamed and thus detect any fraudulent behavior by unauthorized establishments,” the app terms of service read.

Spain’s data protection agency, however, argued that La Liga did not ensure that its users were fully aware of the feature. La Liga was fined $283,000 under the European Union’s General Data Protection Regulation’s digital privacy law. The agency also ordered the app to go offline by June 30.

The soccer league plans to appeal the decision, according to El País.