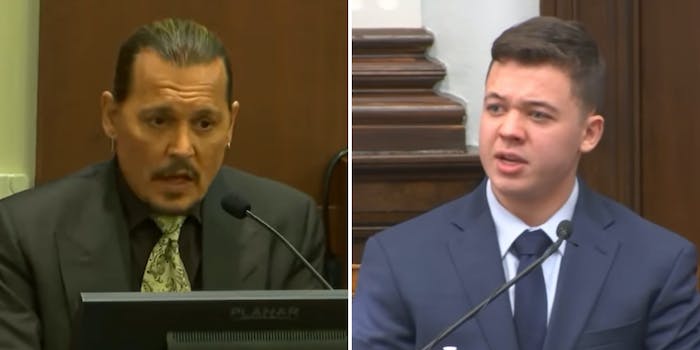 Whoopi Goldberg is also on Rittenhouse's list of possible people to sue.

Kyle Rittenhouse is planning to sue Mark Zuckerberg for defamation.

Zuckerberg is the target of one of “at least 10” lawsuits he’s contemplating, his lawyer told Fox News Thursday morning.

Rittenhouse killed two and wounded a third during chaotic civil rights protests in Kenosha, Wisconsin in 2020. In the criminal trial the following year, a jury found him not guilty of murder and attempted murder.

After his acquittal, Rittenhouse launched a fundraiser to “hold the media accountable in court.”

In February, Rittenhouse told Tucker Carlson that he may sue politicians, celebrities, and athletes. “Whoopi Goldberg’s on the list,” he said. “She called me a ‘murderer’ after I was acquitted by a jury of my peers. She went on to still say that.”

According to Rittenhouse’s attorney Todd McMurtry, Facebook and Instagram flagged posts with a disclaimer describing the shootings as “mass murder.”

“This was not a mass murder incident. It was clearly factually false,” McMurtry told Fox. “To call somebody a mass murderer is seriously defamatory.”

After the killings, Facebook prohibited praise of Rittenhouse and blocked searches for his name. The company rescinded that rule after his acquittal. Facebook may claim immunity under Section 230 of the Communications Decency Act, but it’s possible this wouldn’t apply to statements the platform itself made about Rittenhouse.

McMurtry previously represented a Covington Catholic High School student in his defamation suits associated with commentary and reporting about viral videos of him during an anti-choice event in 2019.

McMurtry said they are going to establish that Rittenhouse’s job prospects have been diminished and that he’s experienced ongoing reputational harm.

“Kyle is never going to have an interaction with anybody where they don’t know who he is. And this is going to follow him around for the rest of his life,” McMurtry said.

Accusing someone of a crime they didn’t commit is generally considered defamation per se, meaning that it’s not necessary to prove they were harmed by the statement to receive damages.

Rittenhouse’s case may be complicated by the issue of whether he’s a limited purpose public figure. The Digital Media Law Project describes a limited purpose public figure as either someone “who voluntarily becomes a key figure in a particular controversy” or “who has gained prominence in a particular, limited field, but whose celebrity has not reached an all-encompassing level.”

This only applies to the subject matter for which the plaintiff has become a limited purpose public figure, in this case the shooting.

Rittenhouse indicated that the outcome of the case between Johnny Depp and Amber Heard partly inspired him to move forward with plans to sue. On Wednesday, the court found both Depp and his ex-wife Heard defamed the other. Depp is largely considered the victor in the suit, however, because the court awarded him higher damages.

“Johnny Depp trial is just fueling me, you can fight back against the lies in the media, and you should!” Rittenhouse tweeted after the verdict. The tweet included a link to his fundraiser.