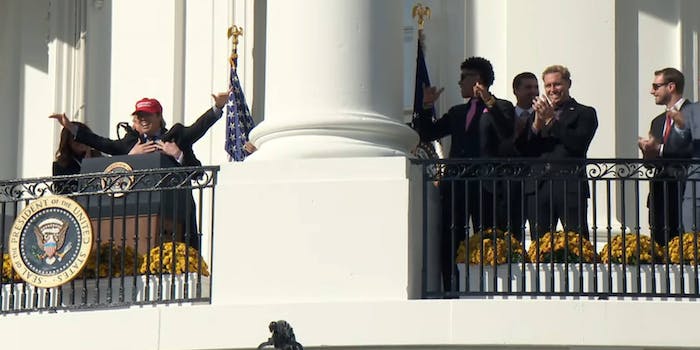 Trump seemed shocked, adding that he didn't know it was going to happen.

Washington Nationals catcher Kurt Suzuki put on a red “Make America Great Again” hat and was hugged from behind by President Donald Trump on Monday as he celebrated the team’s World Series victory.

The moment came as Trump recounted parts of the Nationals season, eventually getting to a point where Suzuki hit a three-run home run against the New York Mets in September.

After Trump called out for Suzuki, the catcher walked over, put on a MAGA hat and stood in front of the podium, spreading his arms outward.

Around the same time, Trump said “aw, I love him” before hugging the catcher from behind and adding: “That’s so nice.”

At the podium, Suzuki said “I love you all” twice before joining the group of his teammates.

“I didn’t know that was going to happen,” Trump said.

Trump also jokingly brought up his own political issues earlier in his speech at the White House event.