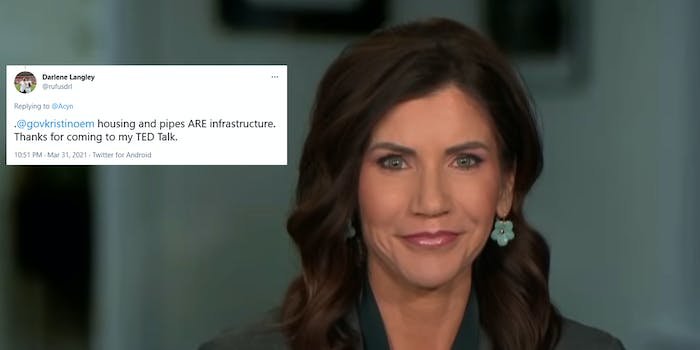 '@govkristinoem housing and pipes ARE infrastructure. Thanks for coming to my TED Talk.'

But during Noem’s criticism of the proposal, she essentially admitted she doesn’t know what infrastructure actually is.

During an interview with Sean Hannity on Fox News, Noem was asked about Biden’s plan, which would cover roads, bridges, broadband, and other projects.

Noem began by criticizing the price tag of the infrastructure package—which has become commonplace among Republicans—but then pivoted to saying she was “shocked” that the plan would also address “housing and pipes,” or what is otherwise referred to as infrastructure.

“I was on a call with the White House today with all of the governors talking about the specifics of this package and I was shocked by how much doesn’t go into infrastructure,” Noem said. “It goes into research and development. It goes into housing and pipes and different initiatives, green energy. And it really is not an honest conversation we’re having about what this proposal is.”

In case you need a reminder: Oxford defines infrastructure as “the basic systems and services that are necessary for a country or an organization to run smoothly, for example buildings, transport and water and power supplies.”

That would include housing and pipes.