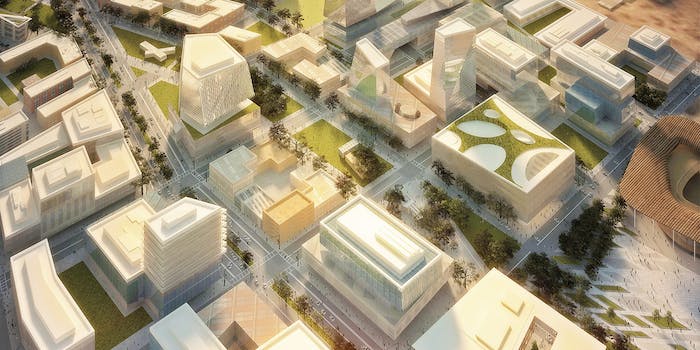 Konza Technology City looks like the hub city of a spacefaring race from a science fiction novel, or the arcology of a post-peak oil future earth.

Well, the plans, models, and photographic mockups look like that. Konza itself looks like a scraped-off square of savannah, 40 miles from Nairobi—in other words, a first-phase building site. Because that’s what it is.

When completed—if completed—Konza will be a smart, green city, with state-of-the-art technological integration, and serve as a hub for tech development, financing, and licensing. It will be a major economic engine for the country of Kenya and a technological entrepôt to the continent. It will feature a university, hospitals, green space, and a walkable urban environment.

If the $15 billion, 5,000 acre city rises into the sky above the “silicon savannah,” according to the master plan that has governed its development since it was first approved by the Kenyan government in 2012, it will provide 17,000 jobs $400,000 million in annual wages and generate $1.3 billion in GRP during its first phase, scheduled to be completed in 2018.

As a keystone of the ambitious Kenya Vision 2030 development plan, it is designed to ultimately produce 100,000 jobs ultimately, host a population of 200,000, and help Kenya become a “middle class country.” It is also designed to establish Kenya as the capital of tech in Africa, and prove in no uncertain terms that Africa is a powerful part of the future of global technology, not just an outlier.

If it fails, however, a victim of corruption, mismanagement, fantasy and the thousand other natural shocks megaprojects are heir to, it will join the dozens of other overly ambitious projects that provide gravestones for economic impatience and grandiosity.

A history of the future

When I visited the Konza site in 2012, it was just beginning. I wrote at the time, “it is currently a spot of grazing land out beyond Nairobi National Park on the Mombasa Road. The scope is hard to mistake from the air.” It was just being fenced at the time, with a crew of workers residing on site. It was grassland, with a scatter of concrete plats, an occasional trailer, and giant pyramids of fencing materials.

Three years later, it looks, well, roughly the same. More road work, more infrastructure, and more talks with potential future investors and tenants. But the dramatic rise into the skies of East Africa of the futuristic glass towers? Not so much.

And there have been problems. Probably the most dramatic was the arraignment of six Kenyan officials for theft, fraud, and conspiracy to commit a felony, over the allegedly improper securing of Konza land. These include a Senator, Johnson Muthama, and the prime force behind Konza, former Permanent Secretary for the Information and Communication Technology Authority (ICT), Bitange Ndemo.

Additionally, Kenyan growth is slow, according to Business Daily Africa, the slowest in East Africa, in fact, with Tanzania and Uganda taking the lead. The World Bank expects Kenya’s growth levels to surge ahead, based on mega projects, including Konza, the planned Mombasa-Nairobi railway, and a huge airport renovation project. But so far, Konza has not made a difference.

Right out of the blocks, there were criticisms. Some were based on politics, which in Kenya are sometimes ethnic as well, faulting the parities and tribes that the proponents of Konza represented. Others were powered by general skepticism. As one tech entrepreneur told me at the time, “The government is ripping us off again! They are going to put up a half-finished ghost town that will smell like, pardon me, like human shit!” She was referencing the poor plumbing that characterizes many Kenyan government constructions. “If they can’t make the plumbing in a building, why should we trust them to build a tech city?”

But since then, the Kenyan intelligentsia has given this more thought and published those thoughts in the major dailies. David Ndii, director of Africa Economics published several essays that persuasively make the case that Konza was a bad bet. “Of bullet trains and delusions of mega techno-cities” makes the case that mega projects are a kind of modern cargo cult. He goes on to argue that “Human capital, not mega-projects, will turbo-charge economy,” an op-ed that inspired Ndemo to publish a counterargument.

Today, finding rosy boilerplate about this future city on the savannah is easy enough (though getting the Konza leadership to comment proved impossible). But getting a critical eye on a project that is so promising and so exciting, but so difficult, is harder to do. So, the Daily Dot decided to ask scholars, entrepreneurs, and investors what they thought of the potential and reality of Konza Technology City.

The critics speak, the boosters respond

Conrad Akunga, co-founder and director of Innova, an African software development company headquartered in Kenya believes the problem with Konza is with the very idea.

“I think the premise of the project is wrong,” he told the Daily Dot. “Silicon Valley was a product of an interplay of several factors – people, technology, academia, entrepreneurship, big business and circumstances and not merely a construction of buildings. A better, cheaper, and faster way to realize something along those lines would be to create an enabling environment now, where people already are.”

Any huge project like Konza requires a balancing act between long-term planning and responsiveness. Akunga said, “When we engaged some of the consultants behind the project I got the impression the project would proceed as planned regardless of feedback.”

John Kieti, Kenyan technology strategist and co-founder of The Disrupt Network identifies that lack of responsiveness as the major rub.

“There’s a danger that there’s no real acceleration to the project’s implementation phases,” Kieti told the Daily Dot, “and more of us may continue dismissing it as it takes too long to actualize something tangible that we can relate directly with.” The issue would go far beyond Kenya’s techies and even its voters. It could have an effect on the city’s investors, business participants, and customers.

If there is one thing that could enable Konza to turn the corner, as Kieti wrote elsewhere, it’s a world class university. The problem is planning.

“Although the setup of a University campus has been fast tracked in the master plan to the first implementation phase, the approach to having a university may be too reactionary and not quite properly entrenched in the overall master plan design,” said Kieti. “The initial Konza design drew too much inspiration from the promise of business process outsourcing which may no longer be the most significant selling point.”

Given the great braids of self-interest and political authorities, both functional and geographical, Kieti suggests the establishment of a private university may be the only way to reach Konza’s goal of “churning out world class talent for taking up entrepreneurial challenges that build on technological innovations.

“Kenya ranks second in sub-Saharan Africa, as per McKinsey’s IGDP Index,” Satchu told the Daily Dot, “which measures (information and communications technology) and the new IT economy, and therefore something like Konza does have a place in consolidating and accelerating this important component of the economy.”

The key to whether it will work, according to Satchu is the government playing its cards right.

“The government has plenty of priority projects and limited cash,” he said. “Therefore, the Government is the equivalent of a venture capitalist, putting in seed capital but looking for other partners to do some of the heavy lifting.

Even then, the current schedule is not doable, and the money remains an X factor, Satchu said. “I am not sure we have clarity or even line of sight on the funding.”

It’s not just music or fashions that come and go. Sometimes, even types of ideas lose their luster. For those who grew up with the Apollo missions, Konza Tech City is an idea that pulls you up onto your feet. Anything is possible.

And these days why shouldn’t the coolest city in the world rise from the African savannah, surrounded by water buffalo and lions instead of cows and wolves? Heaven knows the west has no monopoly on technological innovation in the Internet age.

But no idea, no matter how grand, has ever expressed itself in the real world with the sheer force of imagination. Or rather, that force has to be sustained long after the brainstorming is over. It has to penetrate the planning, financing, building, and barnstorming stages. And whether or not it will when it comes to Konza is far from certain.

We received no response to our requests to interview the leadership of Konza, including new CEO John Tanui.