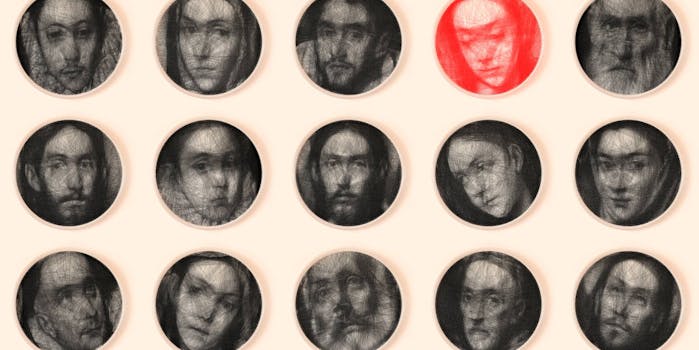 A computer tells him where to thread the loom.

Computers are changing the ways people create and perceive art, from technology that can separate the style and content of famous paintings and apply the style to your photos, to music created by pictures of your face.

A project from new media artist Petros Vrellis modifies the art of knitting by using nontraditional methods to create beautiful knitted images with a single strand of thread. The project called “A new way to knit,” transforms photographs into tactile pieces of art.

Vrellis designed an algorithm using creative coding tool openFrameworks that accepts a photograph as an input and outputs a knitting pattern. A computer tells him where to place the thread as he positions it on anchor pegs along the edge of a circular loom; the darker the image is on the photo, the more times the thread must cross over a particular element on the loom. He creates pieces using a single strand of black thread running 1,500 meters (or about 5,000 feet).

“[A] few months ago, I tried to implement an algorithm that produces photorealistic collages,” Vrellis said in an email. “While experimenting, I realized that the simplest collage ‘piece’ is just a black line. I was impressed to find that a large number of randomly placed lines could effectively reproduce an image.” He used nails as anchors for thread in various positions, and eventually settled on the circular loom.

In a blog post, Vrellis explains the thread will run between anchor pegs 3,000 to 4,000 times on a 28-inch loom. So far, the artist has only knitted faces using this method—all figures from Spanish Renaissance painter El Greco—but the algorithm works on any image.

“Despite the extreme limitations of the design, the depicted faces are still recognizable, but inevitably appear fuzzy and smudged,” Vrellis wrote. “A large degree of uncertainty about the characteristics and the emotions of the depicted persons is inducted.”

While Vrellis’s project applies new methods to pieces that have existed for centuries, other artists have built programs to create entirely new works of knitted art. The KnitYak project turns algorithmically-generated knitting patterns into scarves, each with its own unique pattern and knitted with an industrial knitting machine.

As for Vrellis, he hopes his project can make algorithmically-knitted art available to more people.

“I am designing a robot-knitter that will make the knitting process a lot easier; I want to produce more and cheaper artwork, I believe that art should be accessible to all,” he said.

Vrellis didn’t publish the code for this method, but he plans to open source it in the future. He made just 15 pieces in the series inspired by El Greco, and a couple are now for sale.