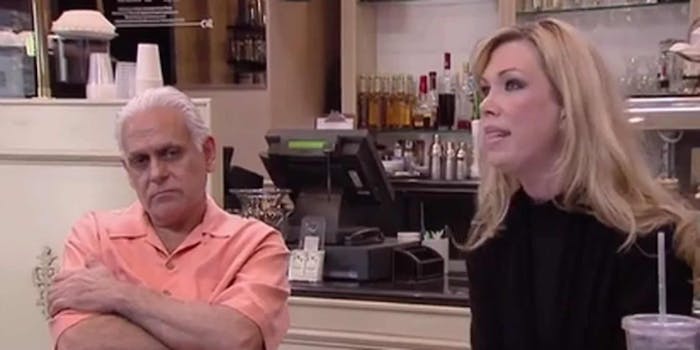 The worst Kitchen Nightmares ever claim they were hacked

Amy and Samy Bouzaglo need to step away from the computer, slowly.

Hyperactive kitchen therapist Gordon Ramsay finally met his match on Kitchen Nightmares, the FOX show that usually sees him sweep into troubled restaurants and turn them around with a snap of his fingers and a well-timed shouting match. For the first time in the show’s history Friday night, Ramsay walked away after running into a wall of madness known as Amy’s Baking Company. The restaurant’s ghoul-eyed owners believed the whole Internet was out to get them even as they served frozen pasta, threatened customers, and stole tips from their wait staff.

Any doubt about the authenticity of the couple’s delusions disappeared shortly after the episode aired, as the duo launched their version of a face-saving PR campaign: all-caps Facebook rants hinting at a vast conspiracy orchestrated by “Yelpers and reddits.” Last night, the couple scrubbed their days-long meltdown, blaming the whole thing on hackers. 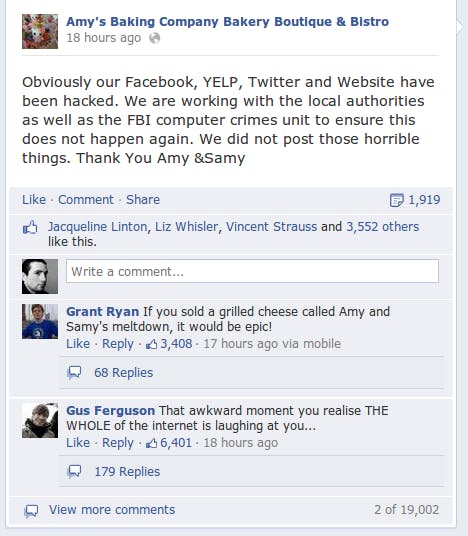 Obviously! You can almost see their mouths agape with an uncertain smile as they typed the message, nodding their heads furiously. Yes, yes this is what really happened. Not shocking to anyone, Facebook commenters aren’t buying their excuse. “I’m gonna use that excuse next time I drunk text one of my ex girlfriends,” one wrote.

There’s a bit of a silver lining for the embattled bakers, however: The number of Facebook fans is ballooning. Rubbernecking has apparently become a favorite Facebook pastime, and you rarely see trainwrecks quite like this.