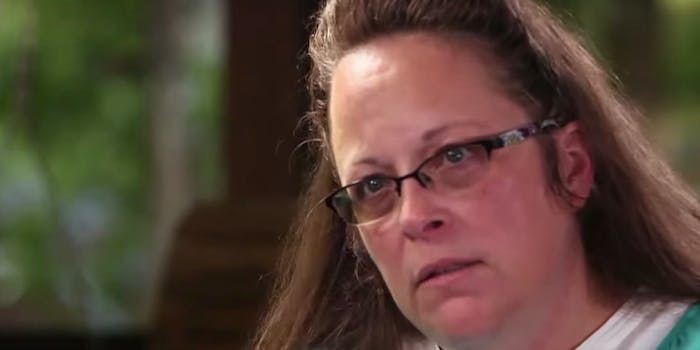 No, Kim Davis didn’t just lose to the man she denied a marriage license to

She lost her seat to Democrat Elwood Caudill Jr.

Kim Davis, the Republican Kentucky county clerk who went to jail after denying marriage licenses to gay couples, lost her race for re-election on Tuesday. Elwood Caudill Jr., a Democrat, beat Davis by approximately 4,210 votes to 3,566 votes, the Hill reports.

A viral tweet wrongly stated that Davis was losing to “man she wouldn’t give a marriage license to.” David Ermold, an assistant English professor whom Davis denied a marriage license in 2015, attempted to run against her. He lost the bid for the Democratic nomination to Claudill in the May primary.

After the Supreme Court legalized same-sex marriage in 2015, Davis still refused to issue marriage licenses to same-sex couples. She cited her religious beliefs, telling Ermold and his partner that she would not issue them a license “under God’s authority.”

Davis faced five lawsuits from same-sex couples and a court order demanding she issue licenses before spending five days in jail. In response to her resistance, Kentucky law was changed so that clerks would not have to sign their names on marriage licenses.

Davis rode the fame from her anti-gay marriage stance all the way to a meeting with Pope Francis at the White House.