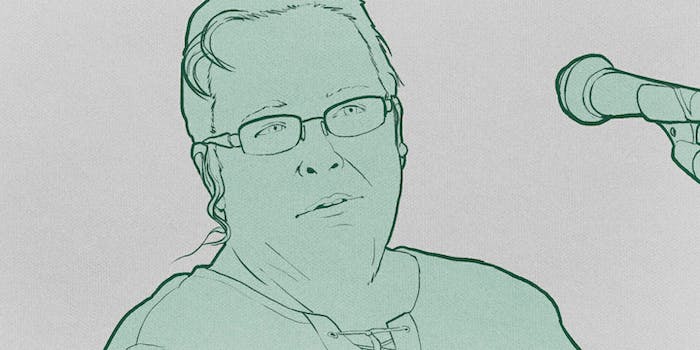 The Liberty Counsel has long promoted the idea that gay marriage will destroy Western civilization.

Despite what the headlines might make you think, however, the Liberty Counsel—founded in 1989 by attorney Mathew Staver, who now represents Davis—is not a recent addition to the SPLC’s hate-group list.

The SPLC, which has kept files on extremist groups for over three decades, has labeled Liberty Counsel—which has predicted that marriage equality will cause the total collapse of society and whose founders falsely link homosexuality to pedophilia—an active hate group since at least February 2014. An SPLC spokeswoman confirmed that it added Liberty Counsel “to our hate list in calendar year 2014.”

In other words, Liberty Counsel’s designation as a hate group has nothing to do with Davis.

Staver has long been recognized as a religious fanatic who—along with his wife, Anita—promotes the idea that same-sex marriage will bring about the end of Western civilization. “The homosexual agenda is the moral iceberg,” Staver said in 2012 video produced by Truth in Action Ministries, another group that believes same-sex marriage is a “national sin” and a sign that Judgement Day is approaching.

In a 2014 interview on Radio America, Staver compared Republicans who refused to oppose gay marriage to people who failed to speak out during the Holocaust—that is to say, he equated gay people with Nazis.

Two months ago, Staver was interviewed on “Faith and Freedom Radio” about the Boy Scouts of America, which this summer lifted its ban on openly gay leaders and employees. “You are going to have all kinds of sexual molestation,” Staver said. “This is a playground for pedophiles to go and have all these boys as objects of their lust.”

Staver was formerly the dean of the evangelical Liberty University Law School in Virginia, where—along with teaching that gay people had instigated the Rwandan genocide—he promoted the idea of using “civil disobedience” against court orders that conflict with “biblical law.”