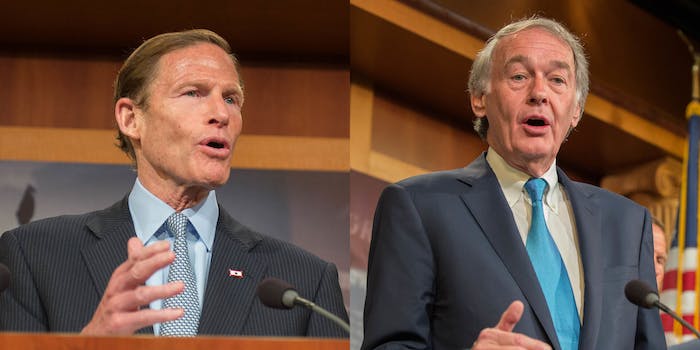 Two Democratic senators on Thursday unveiled a bill that would create new online protections for children and teenagers—and if enacted, it would require social media sites to change how they deal with young users.

Sen. Edward Markey (D-Mass.) and Sen. Richard Blumenthal (D-Conn.) proposed the Kids Internet Design and Safety Act, or the KIDS Act, on Thursday. It would require sites like YouTube, TikTok, Snapchat, and others to overhaul how they present and market content aimed at people under 16 years old.

The KIDS Act covers design features, amplification of harmful content, and manipulative marketing. If approved, the bill would ban auto-play settings that lead to “prolonged and unhealthy viewing sessions” for children; prohibit websites from recommending content to children that are “host-selling or influencer marketing” like unboxing videos; and ban children-focused sites from “amplifying violent, inappropriate, and dangerous content,” among other things.

“Today, kids’ faces are increasingly covered in the glow of their screens, and it’s time to face the chilling reality that some websites and apps are built in ways that harm children,” Markey said in a statement. “Powerful companies push kids to buy products at every turn online, and top platforms are saturated with disturbing content that no kid should ever be exposed to. As a society, we’re playing catch up to the serious risks to kids online, and Congress has a responsibility to say loud and clear that Big Tech needs to get serious about the wellbeing of children and teens.”

Blumenthal added platforms are designed “to ensnare and exploit children for more likes, more views, and more purchases,” and that the bill “puts guardrails in place to reign in recklessness of marketers and Big Tech–protecting children and giving parents some peace of mind.”

Earlier this year YouTube announced that it was changing the way it treated viewers of videos aimed at children–essentially treating anyone who watches a child-aimed video as if they were a child–thus limiting its data collection and advertising abilities on those videos.

The changes came after Google, which owns YouTube, was fined by the Federal Trade Commission after it found that the site violated the Children’s Online Privacy Protection Act.