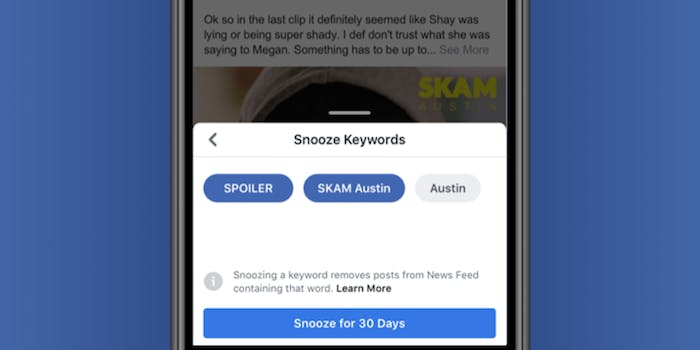 You'll soon be able to hide phrases from your Newsfeed for up to 30 days.

Avoiding social media to keep from learning what happens in the season finale of Westworld—or what’s happening in the real world? Facebook doesn’t want you to do that. To help you out, the platform is testing a new feature called keyword snooze that hides words or phrases from your feed.

Keyword snooze is a new option for a small group of users, TechCrunch reports. If you’re in the test group, you’ll see the fature in the right-hand menu of posts. Tap that menu button, and you’ll get an option to temporarily hide a post based on keywords Facebook cherry picks directly from that post. If you decide to snooze one of those keywords, you won’t see posts in your News Feed with that exact word or phrase from any friend, group, or page for 30 days.

Keyword snooze is the latest News Feed control the social network is offering users. Past controls include the ability to unfollow a particular friend (useful if you want to full control over if and when you want to see what they share) or snooze posts from a person for 30 days (if someone is going on an intense posting spree). On the opposite end of the spectrum, you can customize who you want to see posts from first in your News Feed.

In general, these features—keyword snooze included—are a great move. They give users more control over their Facebook experience, so they only see posts they’re most interested in, from the people they care about most.

But these tools could also be used to silence diverse voices and perspectives in the News Feed, further insulating users from viewpoints that oppose their own worldview. That could work against Facebook’s years-long effort to combat fake news across the network.

For now, keyword snooze is just being tested out, so how the feature works—and the breadth of its keyword blocking abilities—may expand or shrink.