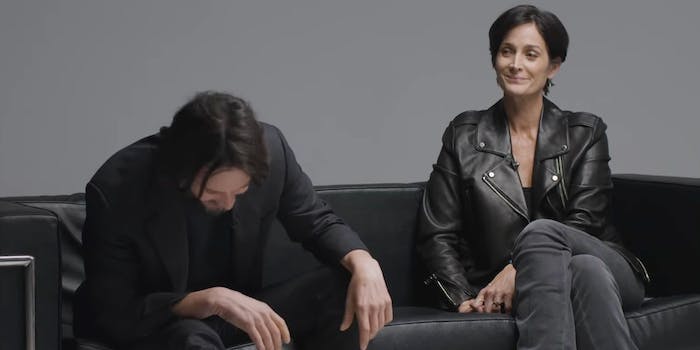 The internet loves this clip of Keanu Reeves laughing at NFTs

Needless to say, the conversation quickly moved on.

The Matrix might’ve peered into our digital future, but its star Keanu Reeves thinks NFTs are a joke.

In an interview with The Verge, Reeves sat down with his co-star Carrie-Ann Moss to discuss the release of The Matrix Awakens video game and the fourth installment of the movie series, The Matrix Resurrections.

During the sit-down, Reeves muses that he hopes any future metaverse isn’t solely a product of Facebook.

“Do you think it’s dystopian the way the original Matrix kind of presented all this?” asks the interviewer.

Reeves seems to think so and strings together some thoughts on the intersection of content creation and cryptocurrency, seeming baffled by the dark side of their convergence.

He confirms that he does own cryptocurrency personally. “A friend of mine bought some from me awhile back,” he says, but he hasn’t done anything with it.

“Did you guys see the Matrix NFT thing they did for Resurrections?” the interviewer follows up, citing the sale where over 300,000 people crashed the site in a mad rush to buy them.

“So when you think about the concept of digital scarcity,” the interviewer continues,
“And things that can’t be copied…”

“That are easily reproduced?” Reeves interjects with a smile, before keeling over in laughter

“Do we get a cut of that?” he asks his co-star, brushing off the topic.

Twitter cheered Reeves’ ability to make light of NFTs and their dubious usage.

Needless to say, the conversation quickly moved on.