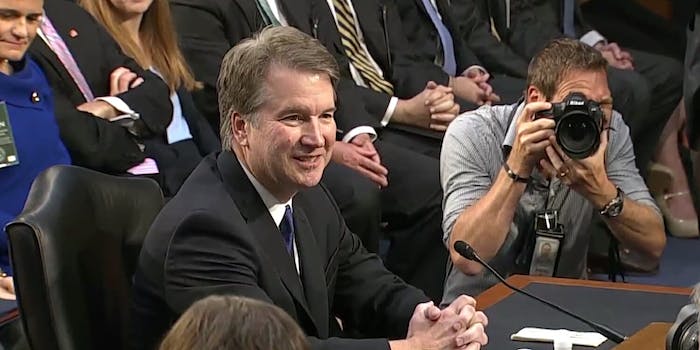 It got heated very quickly.

The beginning of the confirmation hearing was wrought with criticism by Democrats, including Sen. Kamala Harris (D-Calif.), Sen. Cory Booker (D-N.J.) and Sen. Richard Blumenthal (D-Conn.), and shouts of protest from the chamber’s audience. Democrats also repeatedly demanded the hearing be adjourned.

Harris argued that Democrats on the Senate Judiciary Committee had not had time to review documents requested regarding Kavanaugh and Booker implied that the confirmation hearing was being rushed through.

CNN reports that 42,000 pages of documents were turned over to the committee last night.

“We cannot possibly move forward, Mr. Chairman with this hearing,” Harris said. “We have not been given an opportunity to have a meaningful hearing on this nominee.”

Throughout the hearing, protests have erupted from the gallery, including political activist Linda Sarsour.

Amid the shouts from the audience and pleas from Democratic senators, Grassley—the committee chair—routinely gently tapped his gavel, trying to restore order.

At one point Blumenthal moved for the committee to adjourn.

After Grassley asked the Supreme Court nominee to introduce his family, Blumenthal renewed his request for a vote to adjourn the confirmation hearing.

Grassley and the Democrats continued to argue the matter for around a half hour. As of press time, Democrats are still pushing back, preventing the hearing from happening.

President Donald Trump nominated Kavanaugh to the Supreme Court earlier this summer. The hearing is expected to last several days.