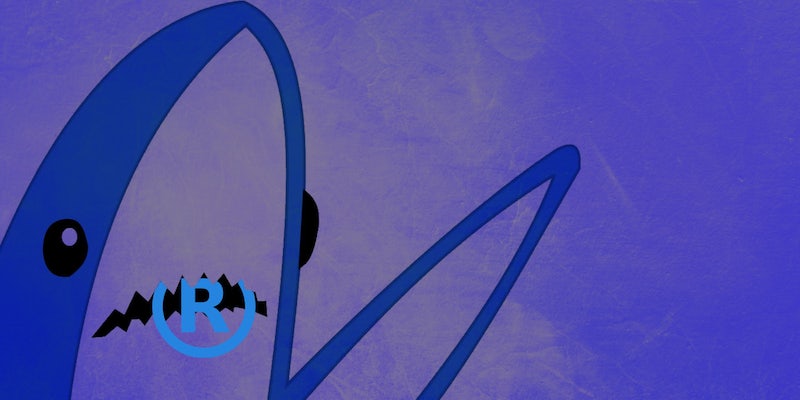 I trademarked a shark and I liked it.

On the first day of February, the Seattle Seahawks and the New England Patriots gathered together in Phoenix, Ariz., as part of an enormous conspiracy to trick Americans into thinking that drinking watery, gross beer is somehow patriotic. Leading up to the event, the main question on everyone’s lips was, “What time is the Super Bowl?” but it was soon replaced with “What’s up with those dancing sharks?”

During Katy Perry’s halftime show performance, the singer was backed by a pair of dancing sharks who, for a whole host of reasons that shed profound insight into the darkest corners of the human psyche, instantly became international megastars.

When you have that dream where you're naked in front of the whole shark school pic.twitter.com/kBVZLlLT46

As with basically anything that becomes popular in 2015, the sharks’ swift ascent to the pinnacle of popular culture quickly triggered a battle over who could turn those shark pups into cash cows. The first round in that legal fight of Perry v. Everybody seems to have fallen decidedly in favor of everybody.

The Hollywood Reporter reports that Perry’s attempt to trademark the “left shark” has been rejected by the U.S. Patent and Trademark Office. “[The left shark] identifies only a particular character; it does not function as a service mark to identify and distinguish applicant’s services from those of others and to indicate the source of applicant’s services,” wrote trademark examiner David Collier.

Collier’s argument is that the link between Perry and the “left shark” isn’t strong enough for people to see something that looks like the shark and immediately associate it with Perry. The shark, and its instantly iconic inability to follow seemingly basic choreography, is bigger than Perry; it exists in its own space in the cultural imagination. The public’s relationship with the shark isn’t necessarily mediated by the singer of “Teenage Dream.”

Collier added that there were significant differences between the costumes worn by the dancers during the halftime show performance and the designs submitted for trademark, which complicated the trademark application.

Yet, since it was clear even before the game was finished that the sharks would be this year’s hottest Halloween costume, Perry quickly made an effort to exercise her intellectual property rights over the characters.

She started selling shark merchandise on her website and snarkily tweeted shade about knockoff costumes.

ATTENTION INTERNET: NO LONGER DO YOU HAVE TO DIY LEFT SHARK COSTUME LIKE THIS GUY: pic.twitter.com/s5RjIa4RiC

However, her most forceful action came in the form of a cease-and-desist order against sculptor Fernando Sosa, who was selling small, 3D-printed figurines of the sharks. While the letter triggered action figures to be yanked from the online store where they were being sold, Sosa put the items back for sale on Etsy and vowed in a blog post to fight back.

In an open letter to Perry, Sosa’s lawyer charged that “the legal merits of your claim seem very weak,” arguing that U.S. law has generally not held costumes to be copyrightable and questioning just how much direct agency the singer had in designing the shark costumes.

Just like how sharks must constantly swim in order to stay alive, so too must Perry’s effort to maintain control over the the intellectual property to the sharks. The visual reproduction of the sharks may ultimately fall beyond Perry’s grasp, but the term “Left Shark” does appear to be something that could be trademarked. While your Halloween costume probably just got about $30 cheaper, there’s a very good chance the packaging will read “deeply resonant metaphor for the insecurities we all feel every day of our lives” rather than “Left Shark.”