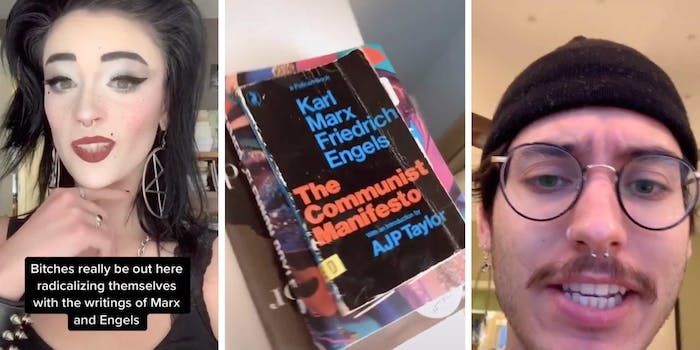 ‘Daddy Karl Marx’ is having a moment on TikTok

TikTok users have never been afraid to get political, and their latest hashtag trend features none other than 19th-century theorist Karl Marx.

#KarlMarxismyDaddy has more than 320,000 views on the platform, with many posts putting a modern-day spin on the influential German writer and his communist ideals.

The most popular post using the hashtag comes from @vegandannydevito.

“Y’all are like CEO of this or CEO of that. First of all, guillotine CEOs,” he says in the TikTok, which is captioned, “and that’s on siezing [sic] the means of production!”

“We’re not gen Z we’re the guilloteens,” one user added in the comments.

Another popular TikTok pairs sound from a Khloe Kardashian cookie-stacking tutorial (can’t make that up) with a video zooming in on a copy of Marx’s The Communist Manifesto.

“Fun fact: in highschool I was voted ‘most likely to overthrow the government,'” @elllemarx wrote in that caption, along with the #KarlMarxismyDaddy hashtag.

Others shared Marxist musings or photos of the man himself with TikTok staples, including the songs “Savage” and “Material Girl.”

Of course, this is not Marx’s first time being memed, but leave it to TikTok and Gen Z—excuse me, the guilloteens—to find a way to pair Marxism with Madonna.