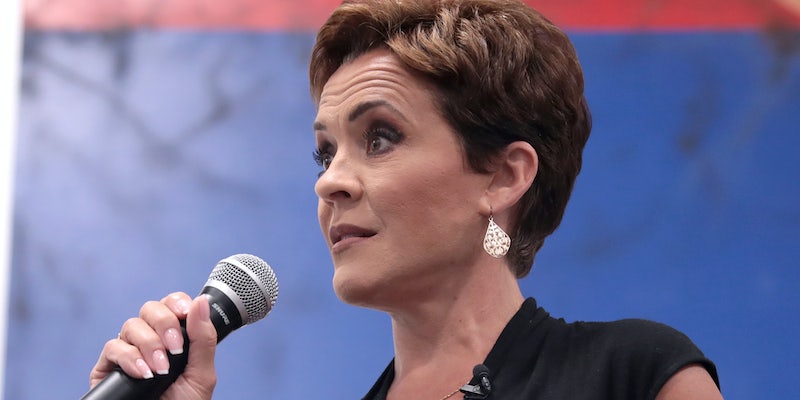 'That’s not what Stormy Daniels had to say.'

Kari Lake offered this unexpected observation at a Turning Points USA conference over the weekend. DeSantis was purportedly in the audience.

Lake started by describing DeSantis as “gutsy” and said he has “bigger—okay, wait let me think about how I want to word this. My staff always says, whatever you do, do not say ‘balls.'”

Continuing, Lake elaborated, “I’ll tell you what he’s got. I don’t know if you’ve heard of this but he’s got BDE. Everybody know what that means? Ask your kids about it later.”

“I call it ‘big DeSantis energy,'” Lake said. “He’s got the same kind of BDE that President Trump has.”

“And frankly, he has the same kind of BDE we want all our elected leaders to have.”

Conservatives loved it. Some said Lake’s reference to Trump’s and DeSantis’ supposed BDE made them wish they could vote for her. “Based” was a common reaction.

Others took issue with everything she said—from the facts to whether it’s appropriate to discuss BDE with children.

@JoJoFromJerz quipped, “Welp, that’s sure as shit not what Stormy Daniels had to say.”

“…[V]ery Christian of her to promote sexualized conversations with your kids about Big Dicks,” said one.

Another commented drily, “And these are the people banning books from schools because of ‘inappropriate sexual content.'”

A few thought that Lake was at least partially correct. “DeSantis is a big dick, all right,” opined @duty2warn.

Numerous commenters wondered if Lake would receive the same scolding treatment about her mouth that Beto O’Rourke got for calling someone who laughed about mass shootings a “motherfucker” last week.

Lake reveled in the attention. “I stand by what I said,” she tweeted after her comments went viral.