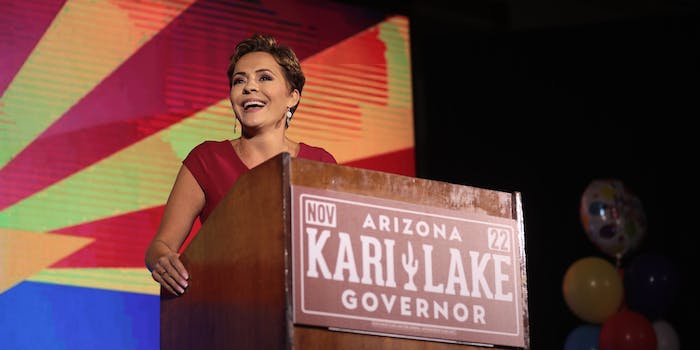 Lake declared victory on Twitter while votes are still being counted.

Kari Lake, one of the GOP candidates for governor in Arizona, is attempting to tweet her way to victory in the Republican primary, despite the race being too close to call.

Lake, a far-right former journalist who has modeled her campaign after former President Donald Trump, claimed victory Wednesday morning despite no clear indication that that was the case. At the time of writing, the New York Times has Lake leading moderate Republican Karrin Taylor Robson by 22,000 votes, with 80% of the vote reported.

Lake cozied up to the former president, repeatedly denouncing the results of the 2020 election and advocating for stricter election laws in her campaign speeches. Lake advocated for the imprisonment of her would-be opponent in the general election in November, Secretary of State Katie Hobbs, citing unspecified election crimes. Prior to the primary, Lake already sounded the alarm about unsubstantiated voter fraud, doubling down on those claims during an interview on election night.

Given Lake’s preemptive voter fraud claims, it was no surprise when the Arizona GOP repeated a statement from the Republican National Committee blasting the Pinal County Elections Administrator for “multiple failures” at polling sites including “63,000 mail-in ballots delivered to the wrong voters” and Republican-heavy parts of the district “running out of ballots.”

It’s unknown if these claims are true.

Lake and other conservatives frequently peddled the theory that Biden only won the 2020 election because of mail-in ballots, which in many states weren’t counted until after Election Day was over. She does not apparently see the irony here.

Lake was on Turning Point USA founder Charlie Kirk’s show Wednesday afternoon to do a victory lap while simultaneously throwing doubt on the election results if they don’t swing her way.

“Am I confident it’s going to be ethical? What’s going on in Maricopa County? Hell no, since when did ethics come into play when it comes to Arizona elections,” she said. “But we’ve got eyeballs and ears and attorneys, and we know we won.”

Right-wing accounts have been quick to hop on the bandwagon of accepting the Lake victory as fact. Lake’s “War Room” Twitter account even called the win a “blowout” despite no evidence supporting that statement.

A conservative outlet tweeted a video of Lake celebrating at an election night party and announcing Lake’s victory. However, the video was from hours prior when Lake took a slim lead over Taylor Robson. Nevertheless, Lake retweeted the announcement.

The race still is yet to be called.