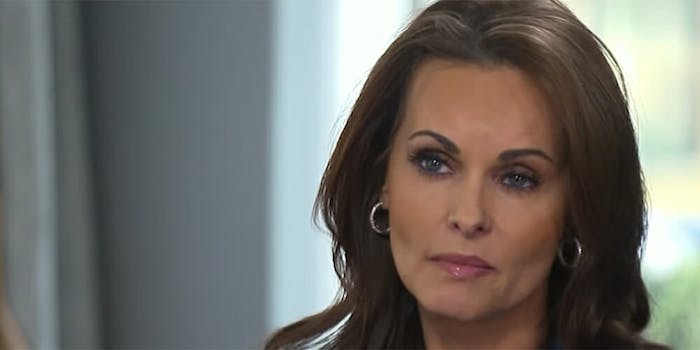 She gets to keep the hush money.

Former Playboy model Karen McDougal has reached an agreement to end a contract that was meant to stop her from speaking on an alleged affair with President Donald Trump.

The New York Times reported on the agreement Wednesday, which frees McDougal from a contract with American Media Inc., owner of the National Enquirer. In 2016, had signed over exclusive rights to her story to the media company in exchange for $150,000.

McDougal has already been forthcoming with details about her alleged relationship with Trump, but the new agreement will keep her from getting sued for doing so. She’ll also get to keep the money from the original contract, and AMI will receive up to $75,000 from any profits she makes by going public.

“It’s a total win,” said McDougal’s lawyer Peter Stris. “We got everything we were fighting for. She got out of the contract, gets the life rights back and owes A.M.I. nothing more.”

Federal authorities reportedly sought information on McDougal in their raid on Trump’s lawyer, Michael Cohen, earlier this month. Authorities also looked for documents related to the $130,000 payout made to Stormy Daniels.

On Wednesday, Trump made a rare comment about the Daniels case in a tweet about the sketch of a man the adult film actress and her lawyer say threatened her to stay quiet about her own alleged affair with the president.

Meanwhile, McDougal is celebrating freedom from her deal.

“It’s one step at a time for me,” she told the Times. “Today, I’m doing my victory dance.”