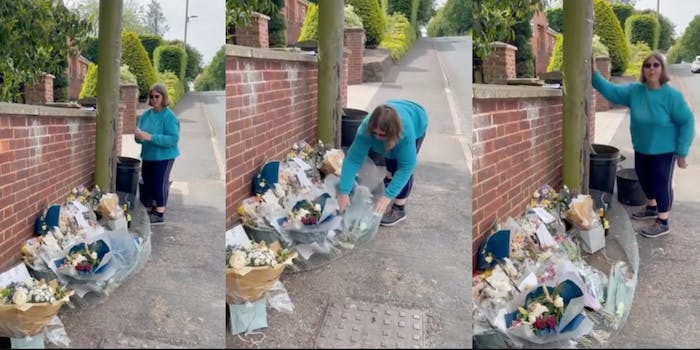 ‘You can’t do this’: Karen filmed destroying floral tribute to dead teen

In the video, bystanders protest her actions.

A woman in the U.K. has stirred outrage online after destroying a floral tribute to a teenager who died in a car crash.

In footage posted to Reddit this week, the woman, identified as Brigitte Graham, can be seen dismantling the roadside memorial in East Devon, despite pushback from onlookers.

The memorial had been set up following the death of 18-year-old Vinnie Dennis, who reportedly passed away on May 26 after the vehicle he was riding in lost control and ran into a wall.

The family of the victim described Graham, who ran for Devon County Council as part of the right-wing UKIP party in May, as “callous” and heartless,” according to Devon Live.

After her identity became known, Graham attempted to defend her actions by arguing that she was actually showing respect to the deceased by removing the flowers.

“After three weeks the flowers were dead which gave the impression that somehow this tragedy had been forgotten. It has not been forgotten,” Graham said. “I therefore removed the dead flowers, kept all the messages from friends and family and attached them to the pole so they can continue to be read. I did this because I cared. I can only apologise for any upset this has caused.”

The girlfriend of Dennis pushed back against the statement, noting that the teenager “died two weeks tomorrow, not three weeks ago” and that the flowers were not in poor shape.

“Most of the flowers that we laid on Saturday, May 29, had their own source of water and were stood in boxes,” Dennis’ girlfriend, Jessica Burt, said. “You can clearly see that they are not dead.”

Graham’s actions have been widely criticized online in the wake of the tragedy, with many calling the woman a “Karen” and a “Boomer” for the controversial act.