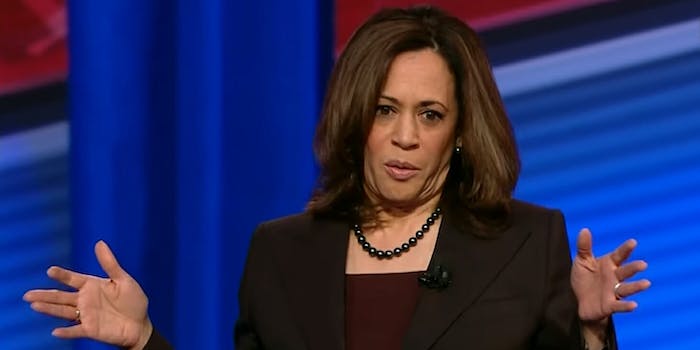 Other 2020 Democratic presidential hopefuls have also made similar calls.

Harris made the remarks during a CNN town hall event on Monday night.

“I think we have very good reason to believe that there is an investigation that has been conducted which has produced evidence that tells us that this president and his administration engaged in obstruction of justice,” the California lawmaker said. “I believe Congress should take the steps towards impeachment.”

While she did come out in support of impeachment proceedings—just as fellow 2020 hopeful Sen. Elizabeth Warren (D-Mass.) did last week—Harris also cautioned the crowd in attendance about what the expected outcome would be, noting that the Senate is controlled by Republicans and therefore is unlikely to vote in favor of removing Trump from office.

“When we look at the impeachment process, there will be what happens in the House: an investigation that takes place. I think we can be pretty sure that it looks like that is very likely to happen,” she said. “And then it’s going to go over to the Senate. In the House there needs to be a vote by a majority, a simple majority, and then it’s going to come over to the Senate. I have not seen any evidence since I’ve been in the United States Senate that the United States Senate—the Republicans hold the majority—I’ve not seen any evidence to suggest that they will weigh on the facts instead of on partisan adherence to being protective of this president. And that’s what concerns me and what will be the eventual outcome. So we have to be realistic about what might be the end result, but that doesn’t mean the process should not take hold.”

The calls for impeachment proceedings among some high-profile Democrats have caught the president’s eye, who claimed on Monday that they could not impeach him because there were “no crimes by me.”

The Mueller report said it could not establish any connection between Russia and Trump’s 2016 presidential campaign, but also said that it would have stated if it could definitely find that the president did not obstruct justice.