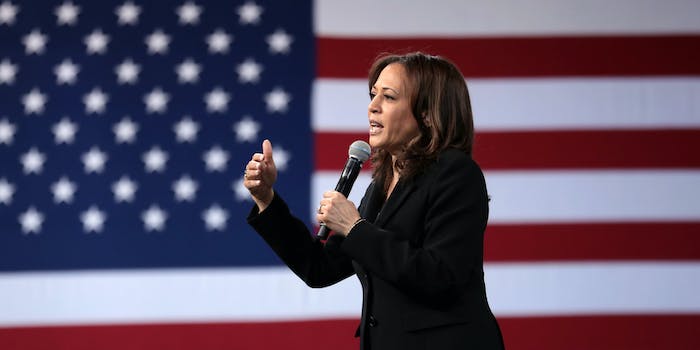 Will a Biden-Harris administration break up big tech?

Here's a look at what Harris has said about a number of tech issues.

This week, Sen. Kamala Harris (D-Calif.) was named Joe Biden’s running mate for the 2020 election. While it will be Biden’s platform, Harris, having run her own primary, has stances on a number of matters, ones whre she could potentially push her new partner on.

Of all the more pressing topics a Biden-Harris administration will face, technology looms large. So what could the California senator do on the myriad of tech issues the nation is currently grappling with?

Harris has been outspoken about some issues, like net neutrality, and served as attorney general in California where she oversaw tech companies in Silicon Valley as they grew to the behemoths they are today.

That connection makes it somewhat unsurprising to see a number of tech companies among her biggest donors. Alphabet, Google’s parent company, Apple, Microsoft, and Facebook were among her top 100 donors over the last five years, according to the Center for Responsive Politics.

While other topics may generate more scrutiny during the presidential election, the tech industry is facing a moment of reckoning from Washington, D.C., that isn’t likely to abate after the election.

Here’s a look at where Biden’s vice presidential candidate stands on a number of tech issues.

Where does Kamala Harris stand on tech issues?

While other prominent Democrats have enthusiastically backed breaking up Big Tech, Harris has been more coy on the issue.

When asked by the New York Times during the 2020 Democratic primaries specifically whether Facebook, Amazon, and Google should be broken up, Harris sidestepped the question.

“I believe that the tech companies have got to be regulated in a way that we can ensure, and the American consumer can be certain, that their privacy is not being compromised,” Harris said, adding: “My first priority is going to be that we ensure that privacy is something that is intact and consumers have the power to make decisions about what happens with their personal information, and that it is not being made for them.”

While Harris avoided the question about breaking up big tech, she does have some history of being concerned about privacy online. In May 2018, she expressed concern over “how much data Facebook is collecting” including location tracking, IP address tracking, and tracking what websites people surf.

However, in May 2019, Harris told CNN that “we need to seriously take a look” at breaking up Facebook, calling it “essentially a utility that has gone unregulated.”

After Harris was chosen by Biden to be his vice presidential nominee, the move was cheered by a number of tech industry leaders including: Facebook’s Sheryl Sandberg, LinkedIn founder Reid Hoffman, and others.

The California senator has long been a vocal supporter of net neutrality rules and has urged for them to be restored after the Federal Communications Commission (FCC) repealed them in 2017.

While running for the 2020 Democratic nomination herself, Harris promised to appoint an FCC chair that was committed to restoring net neutrality, which aligns with past statements she has made on the issue.

She has also pushed for the Save the Internet Act, a bill that would essentially restore the 2015 Open Internet Order that established net neutrality rules and urged her colleagues in Congress to pass a Congressional Review Act (CRA) effort in 2018 that would have reversed the FCC’s repeal.

Harris was also one of only a few senators to grill then-Supreme Court nominee Brett Kavanaugh about his views on the issue, asking whether he would recuse himself from a hypothetical net neutrality case because of a 2017 dissent he wrote.

Harris joined a number of presidential hopefuls in calling for expanded broadband access in the United States, particularly in rural America.

On the campaign trail, she proposed spending $80 billion to provide broadband access to every American by 2024, according to the Des Moines Register.

More recently, the coronavirus pandemic has been at the center of Harris’ broadband plans. The California senator pushed internet service providers who participate in the Lifeline program—which provides internet access for low-income Americans—to expand their service during the pandemic.

Last month, Harris co-sponsored the Senate version of the Accessible, Affordable Internet For All Act. The bill calls for spending $80 billion to install high-speed internet infrastructure, providing discounts for low-income consumers, require affordable internet options using the new infrastructure, and close the gap of students who don’t have access to high-speed internet.

The bill received the backing of a number of advocacy groups.

So while Biden has not been as vocal about tech policy as other candidates were during the 2020 primary, Harris has a record on a number of issues that could help set a tone for their potential administration.